Supreme Court Opts Out Of Being States' Pot Referee 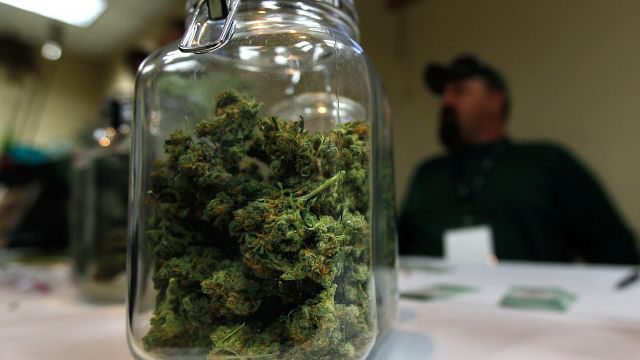 SMS
Supreme Court Opts Out Of Being States' Pot Referee
By Katie Link
By Katie Link
March 21, 2016
Nebraska and Oklahoma argue that since Colorado legalized marijuana, people have been crossing borders with it, putting a strain on law enforcement.
SHOW TRANSCRIPT

Colorado's booming marijuana business can keep booming thanks to a move by the Supreme Court. On Monday, the highest court in the land declined to hear a lawsuit challenging the state's regulation of recreational pot.

The unusual lawsuit was filed by two of Colorado's neighboring states — Nebraska and Oklahoma. The states argue that ever since recreational marijuana use was given the green light in Colorado, it's been making its way across state borders, where the drug is still very much at a red light. This, they argue, puts a strain on law enforcement.

The issue was filed directly before the Supreme Court, since it involves a dispute among states. Cases like this are rare and more commonly include disputes over boundaries or water rights.

The justices asked the Obama administration to weigh in and took more than a year to decide whether the case was worth hearing. Ultimately, without much explanation, in a 6-2 vote the answer was "no."

So why should you care? Weed is the fastest-growing industry in the country, according to a Vice News study. Four states and Washington, D.C., have legalized adult recreational use and a handful of others could soon join them.

What's more, Americans are expected to spend $6.7 billion on the drug in 2016, despite the fact that it's still technically illegal under the federal Controlled Substances Act.

The bottom line here — the Supreme Court doesn’t want to play referee, which means marijuana will continue to be a state issue, at least for the time being.

This video includes clips from WEWS and images from Getty Images.