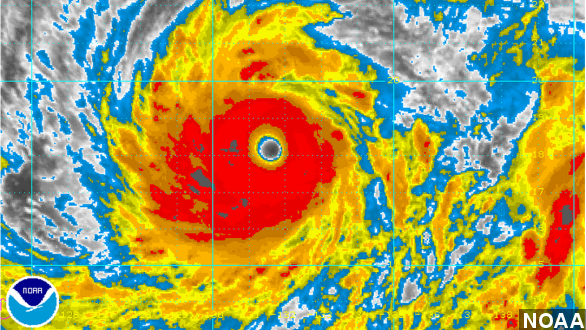 Super Typhoon Vongfong — currently over the western Pacific Ocean — is now the strongest storm of 2014.

Vongfong has produced sustained wind speeds of up to 180 mph, meaning it has "surpassed [wind speeds] required to reach Category 5 equivalent status."

What's worse, this is the second typhoon to hit Japan in less than a week.

ARI SARSALARI VIA THE WEATHER CHANNEL: "Unfortunately this thing is headed up toward Japan. ... I know this is coming right after Japan got hit by Typhoon Phanfone over the weekend."

According to current forecasts, Vongfong will follow the same path as Phanfone. Thankfully, the storm is expected to weaken before it makes landfall.

Super Typhoon Vongfong marks the fifth typhoon in a long-held pattern for the Pacific.

According to a writer for LiveScience, five super typhoons formed in 2012 and again in 2013.

That count includes Super Typhoon Haiyan, which led to the deaths of more than 6,000 people in 2013. Vongfong, at its current intensity, is stronger than Haiyan. (Video via RT)

Japanese officials are preparing for the storm to reach land sometime this weekend. It's expected to bring more rain, wind and mudslides to the region.

This video includes an image from Stuart Rankin / CC BY NC 2.0.