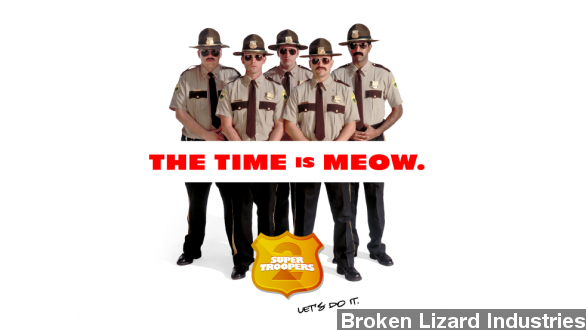 SMS
'Super Troopers' Fans Can Help Fund Sequel Right Meow
By Jake Godin
By Jake Godin
March 25, 2015
The Super Troopers are back thanks to the help of fans funding a sequel through a crowdfunding campaign set up by Broken Lizard.
SHOW TRANSCRIPT

Comedy troupe Broken Lizard, the minds and actors behind the first 'Super Troopers,' launched a crowdfunding campaign Tuesday asking for $2 million to start production of a sequel.

“Okay so here’s the deal. We’re finally getting a chance to make Super Troopers 2. The script is written, and the mustaches are thick and furry. But what happens next is up to you.”

Per usual with crowdfunding, the Broken Lizard guys have a set of perks folks can obtain from donating various amounts of money.

“Hey Farva! What’s the name of that restaurant you like with all the goofy **** on the walls and the mozzarella sticks?”

Perks range from fake mustaches and pre-release tickets to an actual acting role in the upcoming film and the state trooper patrol car they used in it.

Unfortunately the latter two have already been bought out, but worry not, there are unlimited fake mustaches to go around.

As of right meow (Wednesday morning) they’ve already raised more than three quarters of their goal, so they likely won't have any issue surpassing it. The more money they get, the better they say the movie’ll be.

This video contains music from Kevin MacLeod / CC BY 3.0