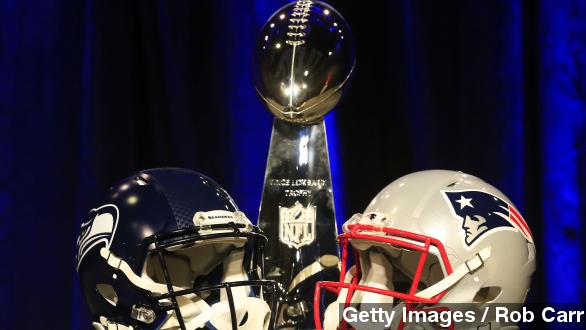 The only thing rivaling the New England Patriots' win over the Seattle Seahawks in Sunday's Super Bowl was the ratings it brought in for NBC.

Last year's match-up between the Seahawks and Denver Broncos brought in 112.2 million viewers for Fox.

Maybe this year's viewing totals will make advertisers feel a little better about the $4.5 million dollars they shelled out for every 30 seconds of air time.

The game spiked to 120.8 million viewers, thanks to a climactic conclusion.

The extremely close game and nail-biting fourth quarter might also be the reason NBC was able to retain those viewers for so long. Fox wasn't so lucky with last year's 43-8 blowout win for the Seahawks.

The Super Bowl also gave NBC's "The Blacklist" a boost as well. Thanks to the network moving it over to the post-game time slot, it raked in 26.5 million viewers and earned the highest rating for a scripted show since the "Friends" finale in 2004.