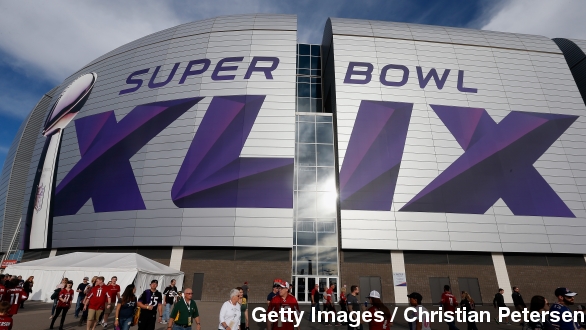 SMS
Super Bowl Ticket Prices Soar As Game Day Approaches
By Matt Picht
By Matt Picht
January 26, 2015
Tickets for Super Bowl XLIX, which will be held in Glendale, Arizona, soared this weekend to an average of $6,000 per ticket.
SHOW TRANSCRIPT

If you're looking to get tickets to Super Bowl XLIX, it might pay to wait. Ticket prices for the big game skyrocketed to record heights this weekend.

Ticket seller TiqIQ tweeted the average price for a Super Bowl ticket jumped to over $6,000. That's double the cost of Super Bowl tickets this time last year and a record high since the site began keeping track of prices five years ago.

And depending on where you want to sit, ticket prices are all over the map. Nosebleed seating currently costs somewhere in the neighborhood of $3,500 to $4,000, while a spot closer to the field could run you anywhere from $7,000 to $9,000 or more.

We should point out Super Bowl prices are hugely variable leading up to the game. Last week, right after the Super Bowl teams were decided, Money noted that prices had fallen to an average of $2,800 per ticket.

That's largely thanks to how the NFL divvies up the tickets: 35 percent of the tickets go to the two teams playing in the game, 35 percent go to the rest of the teams, the league keeps 25 percent, and the host team gets the extra 5 percent.

So most fans buy their tickets from third-party sellers, rather than directly from the NFL. Those vendors tend to change their prices often based on supply and demand.

This year's game takes place in Glendale, Arizona, which will pay about $30 million to host the Super Bowl.