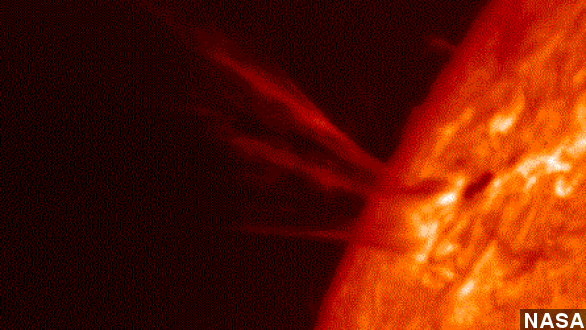 SMS
Sun Cycle During Birth Could Affect Lifespan
By Jasmine Bailey
By Jasmine Bailey
January 7, 2015
According to a study out of Norway, the part of our sun's cycle you're born into could impact how long you live.
SHOW TRANSCRIPT

It's no secret the sun has a lot of effects on our daily lives. Moderate levels of ultraviolet radiation can provide our bodies with much needed vitamin D, while extreme levels can have adverse effects, like skin cancer.

But according to a new study out of Norway, effects of sun exposure can begin as early as conception and can possibly be an indicator of life expectancy.

To come to this conclusion, researchers looked at the life spans of more than 9,000 people who lived between 1676 and 1878.

Now, there is one specific factor to consider — the solar cycle in which these people were born. To further explain, every 11 years or so the sun goes through a cycle, roughly eight years are of low activity, or solar minimum, and three years are at solar maximum or high activity.

The study also suggests women who were born during high solar activity but also had higher income levels were better able to fight the adverse effects of higher levels of early sun exposure.

LiveScience talked to a nutritional geneticist​ who called the findings "a fascinating piece of work that provides further supporting evidence that early-life environmental factors help shape [human traits] in ways that have long-term consequences."

The findings do make sense as there are a lot of studies showing just how negatively ultraviolet rays can affect our quality of life. But in this particular study, there was only a correlation found, not a cause-and-effect relationship.