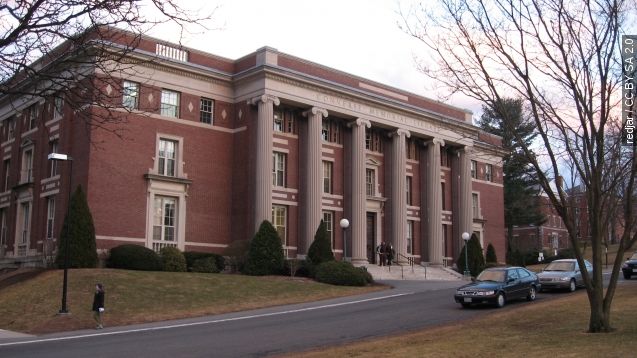 SMS
Suit Claims TAs Were Ordered To Sleep With Students At Amherst College
By Ben Lawson
By Ben Lawson
December 31, 2015
A former lecturer alleges she was wrongfully terminated after defending teaching assistants who, she says, were being treated like "prostitutes."
SHOW TRANSCRIPT

A lawsuit claims teaching assistants at Amherst College in Massachusetts were encouraged to sleep with students to boost enrollment for the Spanish department.

A former lecturer has filed a lawsuit for wrongful termination, intentional infliction of emotional distress and claimed discrimination after speaking up for the assistants.

An Amherst spokesman said these allegations weren't raised until after the lecturer was already let go, and the decision to let her contract expire was based on declining enrollment. (Video via Amherst College)

As of Thursday morning, Amherst had not filed a legal response to the claims.