Sugary Drinks May Cause Early Puberty In Girls, Study Says 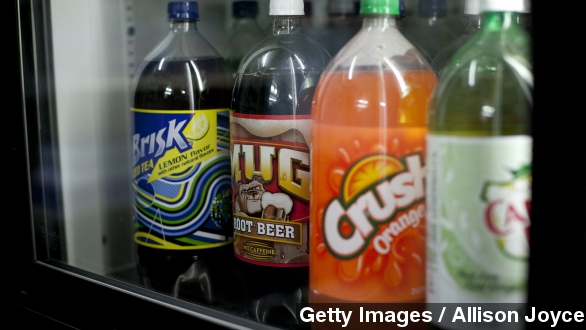 SMS
Sugary Drinks May Cause Early Puberty In Girls, Study Says
By Madison Burke
By Madison Burke
January 28, 2015
Harvard researchers found that girls who consumed more than 1.5 sugary drinks a day had their first period earlier than those who drank less.
SHOW TRANSCRIPT

Girls who consume a lot of sugary drinks may reach puberty earlier than those who don't.

Harvard researchers studied nearly 5,600 girls and found those who drank more than 1.5 sugary drinks a day had their first period almost three months earlier than those who drank less. (Video Via CNN)

While this doesn't sound like much of a difference, experts warn starting puberty earlier, even by just a few months, can be dangerous.

The study's first author told HealthDay, "Starting periods early is a risk factor for depression during adolescence and breast cancer during adulthood."

Here's what experts think is going on: The researchers say high-glycemic foods, like sugary drinks, can cause rapid spikes in insulin in the bloodstream, which can lead to higher concentrations of sex hormones. Changing the concentration of sex hormones has been linked to earlier periods.

Soft drink industry groups quickly tried to cast doubt on the study, arguing that, although girls are reaching puberty earlier, there's not yet enough evidence to point a finger at their products.

But NBC's medical correspondent Natalie Azar points out there are already plenty of other reasons to limit kids' sugary drink intake: