Study Sheds Light On Why Your Cat Hates That Tutu 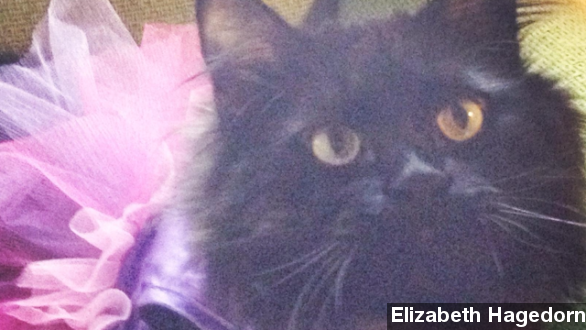 SMS
Study Sheds Light On Why Your Cat Hates That Tutu

By Sebastian Martinez
November 11, 2014
A study tracking the development of domesticated cats has found that genetically they're not quite as domesticated as we thought.
SHOW TRANSCRIPT

Cats are wild. Not wild as in crazy or as in a lot of fun to be around — wild as in not completely domesticated.

According to a new study, cats are only semi-domesticated, which isn't completely surprising considering the fact they only started living with humans some 9,000 years ago ... and also considering everything we know about cats. (Video via BBC)

Cats' independent spirit, their hunting prowess, and the way they so often ignore us completely all make it more surprising the researchers in the study were able to find genetic evidence of any domestication. (Video via BalRutilant / CC BY NC SA 2.0)

The study out of Washington University in St. Louis sequenced the genome of a cat named Cinnamon and found the cat's genes differed from its wild cousins in ways that are known to reflect reward-seeking behavior typically seen in domesticated animals.

The most visible effect of humans on cats seems to have come through differentiation of breeds.

The lead author of the study said most modern breeds are the result of humans trying to select their favorite combination of fur patterns and colors. (Video via Petco)

Many researchers have pointed to the African wildcat, which can be found in most parts of the continent, as the source of modern domestic cats. (Video via Purina)

As for why we ever decided to try to domesticate cats in the first place?

The Los Angeles Times reports researchers theorize the domestication is tied to agriculture — and farmers who wanted the cats to get rid of rodent pests that would eat their harvests.

So next time you get the impulse to dress your kitty in a tutu ... just remember it comes from a long line of cold-blooded killers.