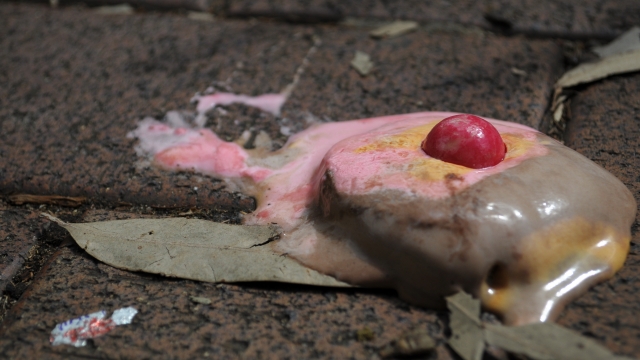 SMS
Science Says The 5-Second Rule Is As Disgusting As We All Thought
By Briana Koeneman
By Briana Koeneman
September 20, 2016
No matter how fast you pick up food that's been dropped on the ground, you can still pick up dangerous germs along with it.
SHOW TRANSCRIPT

Yeah, turns out, the so-called 5-second rule is as disgusting as we all thought.

According to a new study out this week, no matter how fast you pick up food that's been dropped on the ground, you can still pick up dangerous germs along with it.

To finally debunk the 5-second rule once and for all, researchers contaminated four surfaces with bacteria.

They then dropped four different types of food onto those surfaces — watermelon, bread, buttered bread and gummy candy.

The scientists found, generally speaking, the 5-second rule has some truth to it — the longer the food sat there, the more bacteria accumulated on it.

But in some cases, the bacteria made its way onto the food in less than 1 second, and no food was left completely uncontaminated.

As one of the study's authors said in a statement, "Bacteria can contaminate instantaneously."

For the record, watermelon picked up the most bacteria, thanks to its moisture.

And the gummy candy got the least.

So next time you drop food on the floor, you might want to think about the bacteria crawling on it before you take a big bite. Just saying.