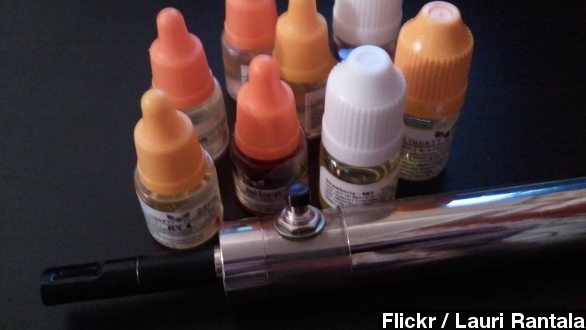 By Briana Koeneman
April 10, 2014
According to a new study, vapor from electronic cigarettes harms human cells in a way that's "strikingly similar" to how cigarette smoke affects them.
SHOW TRANSCRIPT

Electronic cigarettes have seen a surge in popularity over the past few years, mostly because they're often portrayed as a safer alternative to regular cigarettes.

But new research presented at the American Association of Cancer Research's annual meeting this week says that might not be the case. (Via Al Jazeera)

The study, published in the journal Nature, found that people exposed to e-cigarette vapors suffer from "strikingly similar" negative effects as people who smoke or are around traditional cigarettes.

To come to this conclusion, researchers looked at human bronchial cells grown in a medium that were exposed to e-cigarette vapor. They then exposed a separate group of cells grown in a different medium to tobacco smoke. (Via Flickr / Lauri Rantala, Wikimedia Commons / Tomasz Sienicki)

After comparing the two mediums, the scientists found that the cells exposed to the e-cigarette vapor showed very similar gene mutations to the ones exposed to tobacco smoke.

One of the study's authors told Digital Trends, "They may be safer [than tobacco], but our preliminary studies suggest that they may not be benign."

Now, further research into the discovery is needed. But these similar gene mutations could be an indicator that e-cigarette vapor could increase a user's risk of cancer — even though the vapor is tobacco free.

There have been other recent studies that show more dangers of electronic cigarettes. A report from The New York Times shows an increasing number of people are getting poisoned just from the liquid used to refill the tanks on e-cigarettes — especially kids.

Because of these scary potential risks, several states have taken steps to outlaw the sale of electronic cigarettes to minors and ban them from being consumed in certain public places. (Via WNBC)

The moral of the story here? Smoking electronic cigarettes is harmful, but we have a ways to go before we know exactly how dangerous it really is.