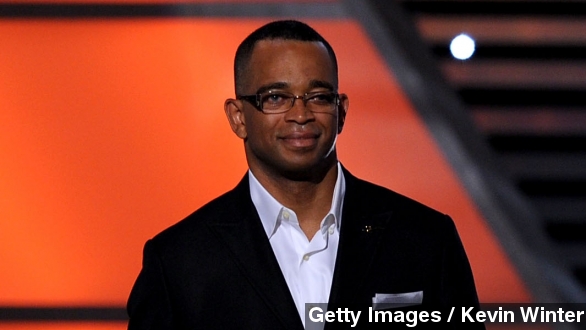 In the sports world, there are those who fit the mold and those who break the mold. ESPN sportscaster Stuart Scott, who died Sunday at the age of 49 after a long bout with cancer, was one of the latter.

Within hours of his death, ESPN shared a pre-recorded heartfelt 14-minute tribute to the late broadcaster.

In the video, fellow colleagues touched on what Scott brought to ESPN for more than two decades: an insatiable charm, charisma and amped up personality that shattered cultural barriers.

"Call Konerko butter cause he is on a roll! ... Boo-yah!" said Stuart Scott.

Among those paying respects, CNN and ESPN writer LZ Granderson called him a "game changer" in his industry.

"Howard Cosell brought personality to the field. Lesley Visser, Bryant Gumbel and others smashed glass ceilings. Keith Olbermann and Dan Patrick brought jovial irreverence. But it was Scott who looked at the profession and doused it with hot sauce."

As a Mashable writer simply puts it, "He made what he did cool, something to aspire to. He turned the notion of the stodgy sportscaster on its head."

Scott joined ESPN in 1993 for the debut of ESPN2. And it wasn't long before his fresh delivery landed him a spot at the SportsCenter nightly anchor desk and regularly hosting NBA and NFL games on the network.

That's not to say it wasn't a difficult road for Scott. Early on, he reportedly received hate mail for his embrace of hip-hop culture. But he didn't let it get to him. He even later appeared in music videos for LL Cool J and Luke.

As TIME points out, Scott wasn't ESPN's first black sportscaster, but he was first to mix in hip-hop culture in his broadcasts, which would ultimately inspire those who followed in his footsteps.

Scott told XXL Magazine last year, "You've got to be true to who you are and what you do. I'm more of a hip-hop feel person. Music is how you feel. The younger the mind, that's how I want to be."

In 2007, Scott was diagnosed with a rare cancer, something he spoke candidly about when he was awarded the 2014 Jimmy V Perseverance Award.

He said at the ceremony, "I'm not losing. ... When you die, that does not mean that you lose to cancer. You beat cancer by how you live, why you live, and the manner in which you live. So live."