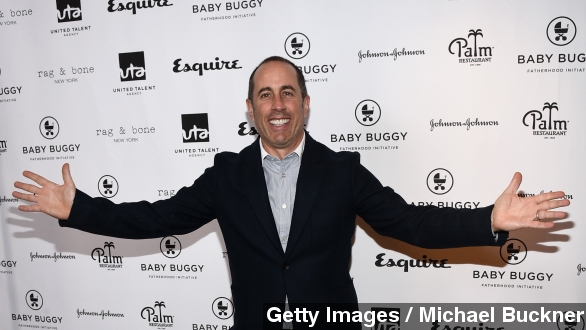 SMS
Streaming Services Reportedly Bidding For 'Seinfeld' Rights
By Evan Thomas
By Evan Thomas
March 15, 2015
'Seinfeld' could be coming to a major streaming service, according to insiders who say rights talks are underway.
SHOW TRANSCRIPT

Good news for binge watchers: You soon might be able to stream "Seinfeld."

The Wall Street Journal talked to sources familiar with the deal, who say Hulu, Amazon and Yahoo are all considering buying "Seinfeld" streaming rights from Sony Pictures Television.

Insiders say the current price is more than $500,000 per episode. That comes out to at least $86 million — and is expected to be much more — for a deal that could last a decade.

Not bad for a show that wrapped up its original run 17 years ago. But any such payout would be just a tiny chunk of what "Seinfeld" has earned in its lifetime.

It's in its fifth syndication cycle on cable, where Vulture reports it has pulled in some $3 billion in revenue since 1995.

According to some reports, the company had considered a deal last year but instead went with the rights to "Friends" in a four-year deal at half a million dollars per episode.

The "Seinfeld" deal is expected to close within the next few weeks.