Stocks Are Down, But Don't Call It A Crash 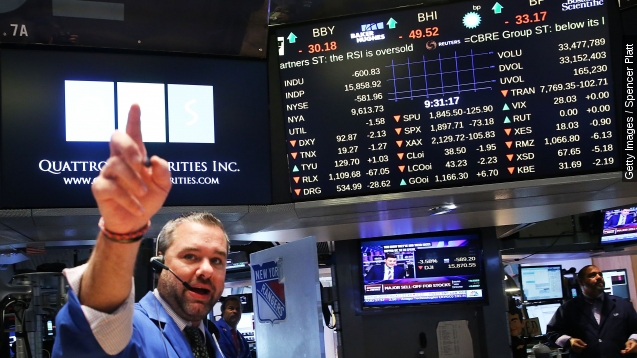 SMS
Stocks Are Down, But Don't Call It A Crash
By Katie Link
By Katie Link
August 24, 2015
A volatile morning for the market likely made analysts panic. The good news? It's just a market correction. The bad news? It could get worse.
SHOW TRANSCRIPT

Navigating the stock market is tough. There are bulls and bears and thousands of trading symbols to keep track of. And the media can make matters worse.

Dramatic headlines ruled the early hours of the Internet Monday morning as the Dow fell more than 1,000 points.

"The market is worried that the global economy is slowing down. And China is one of the biggest economies in the world, and their stock market and their economy have been slowing dramatically," CNBC's Sue Herera reported.

Big companies like Apple, McDonald's and Intel do business in China. And since China's economy seems to be slowing, those companies won't be as profitable, and stock prices drop. Basically, panic causes more panic.

"We're clearly in a bit of a panic mode," Bob Doll reported for CNBC.

The numbers might be alarming but don't freak out just yet. We can't call today's stock market drop a "crash" here in the U.S.

The better term is a "correction." It's a downward movement of a stock, bond or market index that's a decline of at least 10 percent from a previous peak.

Corrections cause some investor pain, but people generally agree it's better to go through a correction than risk a bubble.

A stock market "crash" on the other hand, is when there's a decline of 40 percent or more. We did see a crash back in October 2008.

"The fundamentals on the U.S. side are there. We've seen a pretty strong jobs market, a pretty strong housing market, so what a lot of optimistic strategists are saying out there is look 'The U.S. is the cleanest shirt in a pile of dirty laundry,'" Cristina Alesci reported for CNN.