Steven Sotloff: The Kidnapped Journalist No One Knew About 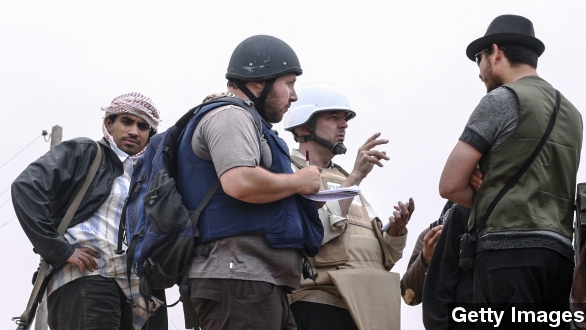 SMS
Steven Sotloff: The Kidnapped Journalist No One Knew About

Steven Sotloff went from the journalist whose disappearance went virtually uncovered to the man who's now the focus of American media coverage of ISIS.

Sotloff disappeared in August of last year near the Syrian-Turkish border as he tried to cover the Syrian conflict and the growing threat of the Islamic militants. He appeared in an ISIS video released earlier this week showing the beheading of another journalist, James Foley. ISIS said Sotloff was next if the U.S. didn't stop airstrikes against the militants in Iraq. (Video via WPLG & ABC)

His bylines appeared in Time magazine. Along with Syria, he covered Libya and the attacks on the American embassy in Benghazi extensively.

Family friends say Sotloff's family has suffered silently since he disappeared, not knowing if he was alive until that video was released that promised his death.

SOTLOFF'S MOTHER ON WFOR: "He's still alive, so there's nothing to say."

Sotloff's parents live in a Miami suburb called Pinecrest. Local reporters say police have staked out the home to guard the family's wishes for privacy.

The family's silence and the fact the public was largely unaware of Sotloff's kidnapping to this point appears very deliberate.

Local politicians confirmed they've been working with Sotloff's family and the U.S. State Department to secure his release for several months.

EMERSON  LOTZIA, SOTLOFF'S COLLEGE ROOMMATE ON WTVJ: "Everyone is very scared right now. No one really knows what to think of this situation because we never really thought that we would have one of our friends in this situation."

While Sotloff's college roommate was willing to give interviews to local media earlier in the week, USA Today noted Thursday night he began declining interviews at the request of Sotloff's family. It's not hard to see why.

ISIS' brutality has been well-documented since the militant group swept through northern Iraq early this summer in a blitz offensive. The group took both U.S.-supplied military equipment from the Iraqi Army and money from banks. (Video via CBS)

A contributor for The Daily Beast writes he sat down for a drink with Sotloff just days before the journalist disappeared. He was concerned because sources indicated another Canadian journalist new to war coverage wasn't being careful.

Several media outlets now report ISIS demanded a $130 million ransom for the return of Foley. The U.S. military says it conducted a rescue operation that resulted in a gunfight with militants, but the rescue team determined Foley and Sotloff were not in the location they targeted. (Video via NBC)