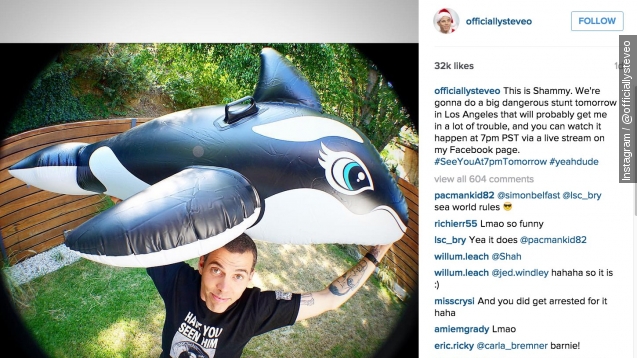 SMS
Steve-O's Latest Anti-SeaWorld Stunt Diluted His Message
By Matt Moreno
By Matt Moreno
August 10, 2015
The "Jackass" actor was arrested in LA after climbing a crane in a stunt against SeaWorld, but the activism message didn't get much attention.
SHOW TRANSCRIPT

"Jackass" daredevil Steve-O has made a career of performing over-the-top stunts. (Video via Paramount Pictures)

But his stunt Sunday night in Los Angeles didn't have some rolling on the floor with laughter.

"The LA fire department is not happy with the performance stunt done by the TV personality. ... He climbed a towering crane and live streamed the video on his Facebook page," KNBC reports.

And it was all for this: The prankster hung an inflatable whale with the words "SeaWorld Sucks" at the end of the crane and shot off fireworks to draw attention.

Steve-O eventually climbed down from the crane and was placed into police custody. His idea fell a little flat in advocating against SeaWorld, however.

Coverage on most of the local news outlets didn't focus on the SeaWorld message.

And some people on Twitter were downright angry with the actor for wasting public money and services on his dangerous stunt.

Steve has acted out against SeaWorld in the past, changing a SeaWorld Drive road sign to "SeaWorld Sucks" last year. That act got a lot less attention than his much riskier stunt Sunday. (Video via YouTube / steveo)

SeaWorld has taken a hit since the documentary "Blackfish," focusing on the parks' treatment of orcas, debuted on CNN. Net income dropped 84 percent and park attendance fell by 100,000 visitors in the second quarter of this year, compared to 2014, according to Time.

Steve-O fans might've gotten a good chuckle out of his stunt, but when it comes to raising awareness about SeaWorld? People's attention seemed to be elsewhere.