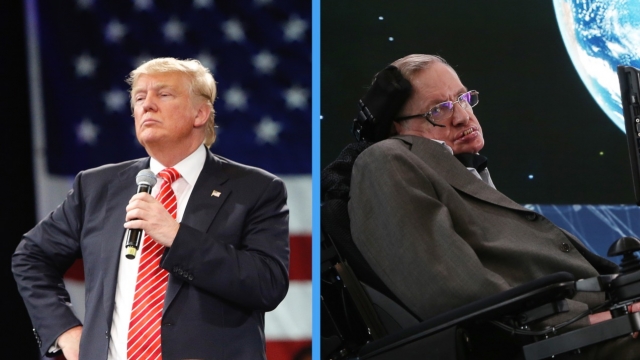 SMS
Stephen Hawking On Donald Trump: 'He's A Demagogue'
By Ryan Biek
By Ryan Biek
May 31, 2016
It's never good when one of the world's best-known scientists calls you illogical.
SHOW TRANSCRIPT

Stephen Hawking may understand theoretical physics and cosmology, but can he explain the rise of Donald Trump?

"I can't. He's a demagogue who seems to appeal to the lowest common denominator," Hawking said.

Trump was a small part of the renowned scientist's interview on ITV, but Hawking's negative view can't be good for the presumptive GOP nominee.

A refresher for those of us not quite as whip-smart as Hawking: A demagogue is "a political leader who tries to get support by making false claims and promises and using arguments based on emotion rather than reason."

Yeah, not a great name to be called by someone whose job relies on reason. Most of Trump's opponents have also called him out along the lines of demagoguery.

"You may not be aware of this, Donald, because you don't follow this stuff very closely," Marco Rubio said during a CNN debate.

"Let me tell you what he does. He says one thing, and then he goes back and tries to clean it up," John Kasich told Fox News.

"Donald Trump alleges that my dad was involved in assassinating JFK. ... This man is a pathological liar," Ted Cruz said.

For his part, Trump beat all three of those critics in the Republican primary process. And as reports say he's gotten past the magic number of 1,237 delegates, he appears to have clinched the Republican nomination.