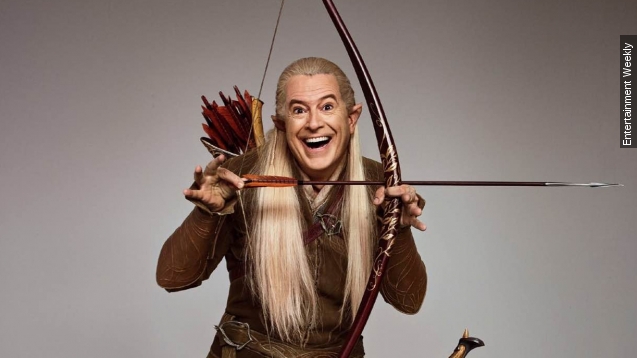 "I'm upset," the host of 'The Late Show with Stephen Colbert' said.

See. Told you. (Video via CBS / 'The Late Show with Stephen Colbert')

It all started when scientists in Brazil discovered a new species of spider and named the arachnid after a little guy from a little book series and movie franchise you may have heard of. (Video via New Line Cinema)

"My precious," Smeagol says in the third film of the "Lord of the Rings" franchise.

Since the spider hangs out in dark caves, the researchers thought it'd be fun to name it "Smeagol." They thought wrong.

"Smeagol wasn't a scary creature that lived in a cave. Smeagol was a kind and friendly hobbit-like creature who lived on the banks of the great river and enjoyed spending time with his friends and his family," Colbert said.

Colbert, has proven before he's a huge fan of the franchise. He goes on to let the researchers know, the name should've actually been Gollum, the monster Smeagol turns into thanks to the power of the One Ring. (Video via New Line Cinema / 'Lord of the Rings: The Two Towers')

This isn't the first time Colbert has proven he is the King of all Nerd-dom.

"I say it's a perfect design. I've done my analysis okay," Colbert said as he picked up a dry erase board underneath his desk to prove his point. "People think it's actually three different plasma streams but it's all one," said in November 2014 on "The Colbert Report."

So Mr. Colbert, here's to you for fighting the good fight and keep the land of the nerds safe from all enemies, foreign and domestic.

This video includes images from Getty Images and Entertainment Weekly