Stephen A. Smith Is Starting To Rub Athletes The Wrong Way 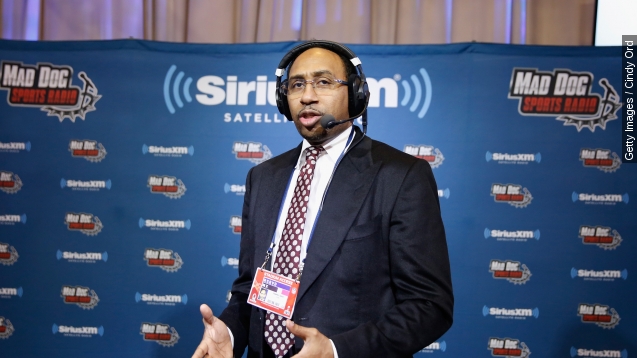 "You don't want to make an enemy out of me. I'm not having it," Stephen A. Smith said.

The "First Take" co-host is getting personal with former NBA MVP Kevin Durant. Quick recap: Last week, Smith reported Durant is leaning toward signing with the Lakers in 2016.

"And I'm looking right into the camera. And I'm gonna say it again. You don't want to make an enemy out of me. I'm not having it," Smith said.

So it got personal. Which — when it comes to Stephen A. Smith — sounds kind of familiar.

76ers guard Michael Carter-Williams wrote an article criticizing Smith for accusing Philadelphia of tanking to get a high draft pick in 2014, saying he and the rest of the media were "missing a lot of context" in their stories.

Smith went on his radio show and again responded to the allegations with a threat against an athlete he's supposed to cover.

“If these guys want to come at me, let them do it at their own peril. It will be a mistake."

Other professional athletes have accused him of overstating his personal relationships with them. So much so, it's become a punch line.

"This hurts me to say this, because D-Wade is a friend. We have hung together many times. Intimately," said Jay Pharoah, imitating Smith on "Saturday Night Live."

Josh Gordon blasted the "First Take" host for saying he was "done with" the embattled Browns WR. In response, Gordon wrote an article that asked, b

This is all within the last year, so it's looking like professional athletes are getting fed up with Smith's acerbic style of reporting. And members of the media aren't far behind.

Troy Machir of Sporting News wrote, “It's not so much that Smith is right or wrong, but that he continues to make things personal. ... Smith is a journalist by trade, a profession whose role is to tell the story, not be the story. He criticizes but refuses to be criticized. He has become the story, one very few want to read.”

Of course, some amount of pot-stirring should be expected from a show whose tag line is "embrace debate."