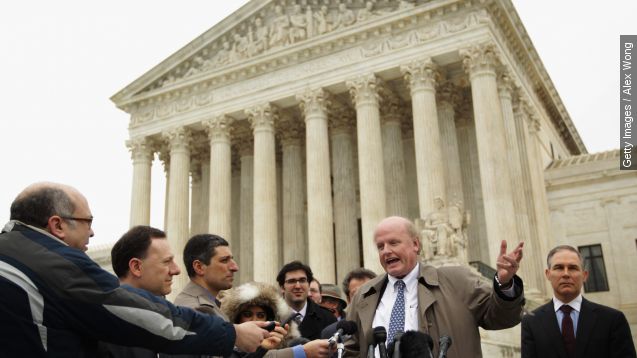 "This should be an easy case. Frankly, it probably shouldn't have been taken up," President Obama told reporters.

The Obama administration has been nothing but confident that King v. Burwell, the current legal challenge in the Supreme Court against the president's signature health care law, will be decided in its favor.

But some states apparently aren't so sure the case will go the president's way. On Monday, three states were conditionally approved by the federal government to set up state-run health insurance marketplaces.

The approval grants Delaware, Pennsylvania and Arkansas the ability to establish their own exchanges. All three states were previously among the 34 which had opted to rely on the federal health insurance marketplace.

The Supreme Court is about to decide whether those states without their own exchanges can still access the federal subsidies which help people pay their premiums — the language in the original bill implied only state-run markets get the subsidies. The decision could make health insurance unaffordable to millions of Americans.

Setting up a state-run marketplace would help states avoid losing those subsidies — but most haven't bothered. North Carolina governor Pat McCrory told The Washington Post in February, "There's no B plan by either the federal government or the states." (Video via WTVD)

The Obama administration has supported the possibility of a Congressional fix to the health care law if this current legal challenge succeeds; however, such a measure isn't likely to get through a Republican-controlled Congress.