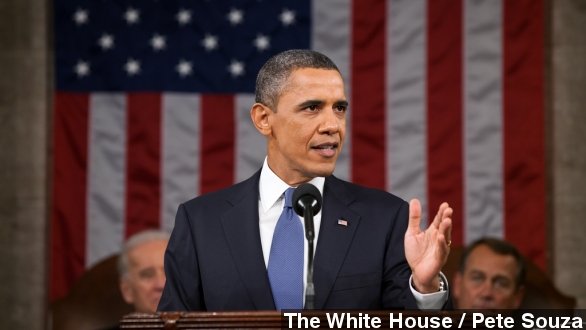 SMS
State Of The Union: The Speech Before The Speech
By Zach Toombs
By Zach Toombs
January 19, 2015
The president has already given an extended preview of the speech he's set to deliver to the nation Tuesday night.
SHOW TRANSCRIPT

We won't hear 2015's State of the Union until Tuesday night. But the president's extended preview of the address means we've already heard the speech before the speech. This is what you'll hear again Tuesday.

"Today, I'm announcing an ambitious new plan to bring down the cost of community college tuition in America. I want to bring it down to zero," President Obama said.

Two years of free community college is already available in Tennessee. But on a federal level, the plan could cost tens of billions of dollars within a decade.

"Neither government nor the private sector can defend the nation alone. It's going to have to be a shared mission. Government and industry working hand in hand as partners," the president said.

But his plan to share more data between companies and the NSA will be a hard sell.

"2014 was the fastest year for job growth since the 1990s. Unemployment fell faster than any year since 1984," President Obama said.

Unemployment is at its lowest level since before 2008's financial crisis.

"There are 43 million Americans who don't get paid sick leave, which, when you think about it, is a pretty astonishing statistic," Obama said.

A new policy will give federal workers six weeks of paid leave for new children or to care for an ill relative. (Image via Vladimir Pustovit / CC BY 2.0)

This video includes images from Getty Images and Vladimir Pustovit / CC BY 2.0 and music from Magu the Dog / CC BY NC SA 3.0