State Of Emergency In Ferguson Ahead Of Grand Jury Decision 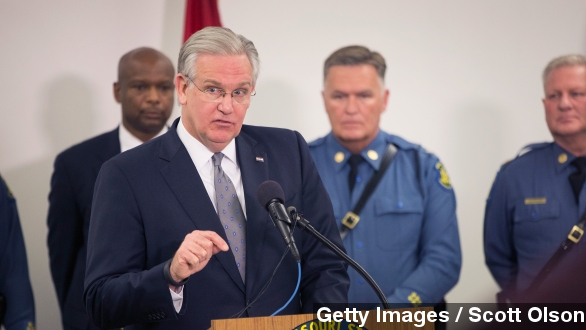 SMS
State Of Emergency In Ferguson Ahead Of Grand Jury Decision
By Matt Picht
By Matt Picht
November 17, 2014
Missouri Governor Jay Nixon has declared a state of emergency ahead of a grand jury decision on indicting Darren Wilson for shooting Michael Brown.
SHOW TRANSCRIPT

The grand jury decision about whether police officer Darren Wilson will be indicted for fatally shooting Michael Brown is expected to come down any day now, and Missouri Gov. Jay Nixon is taking action ahead of the verdict.

The governor declared a state of emergency in Missouri Monday afternoon, citing "the possibility of expanded unrest" and the need to "ensure the safety and welfare of our citizens." The order unifies various law enforcement agencies in Missouri, activates the National Guard, and puts the St. Louis County Police Department in charge of security in Ferguson.

Nixon's order comes in response to widespread fear in Ferguson about reaction to the grand jury verdict. Protests over Michael Brown's death were marred by looting, vandalism and a heavy police crackdown on demonstrators.

Many Ferguson residents are concerned it could all happen again if Wilson isn't indicted. Stores have been boarding up their windows, and gun sales in the town have spiked. (Video via NBC)

But many protest groups have spent weeks planning how to keep demonstrations as peaceful as possible after the grand jury's decision. One CNN reporter noted protesters view Nixon's order as premature, saying it unfairly assumes public reaction will be violent.

"The protesters, for their part, have said we have been protesting peacefully. ... We have been generally peaceful, and this just adds fuel to the fire, trying to paint us as violent protesters."

The state of emergency lasts 30 days, unless Nixon orders an extension.