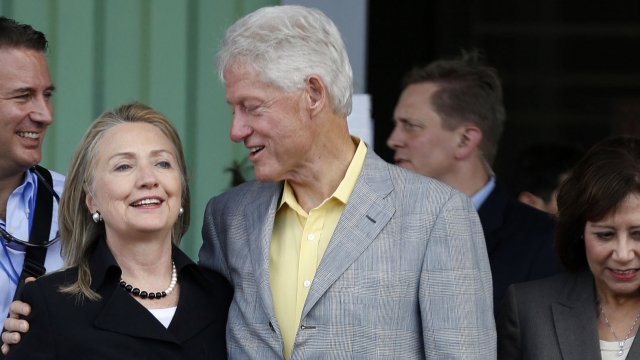 "My work as secretary of state was not influenced by any outside forces. I made policy decisions based on what I thought was right to keep Americans safe and to protect U.S. interests abroad," Hillary Clinton told CNN's Anderson Cooper in August.

But people are questioning whether what Hillary Clinton said is true — especially after a new ABC report.

The report suggests the State Department under Clinton's leadership gave "special attention" to anyone deemed a friend of Bill Clinton — or "FOB" — in the wake of the 2010 Haiti earthquake.

ABC obtained State Department emails from Hillary Clinton's time as secretary of state. A senior aide exchanged emails with a Clinton Foundation official and asked the official to "flag" people who had a relationship with Bill Clinton.

According to its website, the Clinton Foundation has raised over $30 million for Haiti since 2010. Both Clintons made several trips to Haiti after the earthquake. Bill Clinton was appointed U.N. special envoy for Haiti before the earthquake. He also conducted work for the Clinton Bush Haiti Fund.

Former presidents Bill Clinton and George W. Bush formed the Clinton Bush Haiti Fund just after the earthquake. It raised over $54 million and gave grants to 50 organizations that aimed to spur economic development.

Hillary Clinton's senior State Department aide and other officials denied to ABC there was special treatment. Rather, they said they were looking at whether the people offering assistance had a history of responding to previous disasters.

But that didn't stop Clinton's opponent, Donald Trump, from seizing on the report Tuesday.