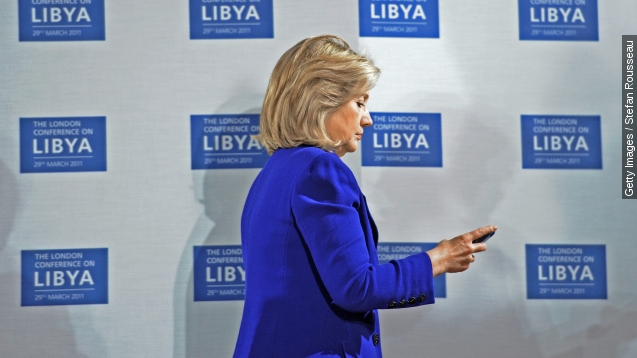 The State Department has released the first batch of emails from 2016 presidential candidate Hillary Rodham Clinton's time as secretary of state.

The emails are from the controversial private account Clinton used during that time.

These newly released emails are related to the 2012 attack on the U.S. mission in Benghazi, Libya, that killed four Americans, including U.S. Ambassador J. Christopher Stevens.

There are a lot of emails, and the State Department hasn’t exactly made it easy to read what they’ve posted so far.

But what do we know? Well, we now know that Clinton learned from an October 2012 NPR report that the September 11 Benghazi attack might have not been preceded by a political demonstration. (Video via ABC)

And the emails show Clinton regularly circulated information from a friend and employee of the Clinton Foundation, Sidney Blumenthal. Blumenthal reportedly had business interests in Libya at the time. Clinton circulated this e-mail with the message "Useful insight. Pls circulate."

Clinton has said the emails did not contain classified information, and so far that seems to be true. But one of the emails was retroactively upgraded to classified during the release process. It was sent to Clinton on November 18, 2012, and cites reports Libyan police had arrested several people who may have been connected to the Benghazi attack. Reporters questioned the safety of sharing an email the U.S. government now considers sensitive on a private email account.

"There was no prohibition from using private email as a public official, we’ve spoken about this in the past, I don’t have much more to add than that, I would again note that this information was not classified at the time," said State Department spokesperson Marie Harf.

This is the first installment of many expected email releases. Clinton turned over about 55,000 pages of emails to the State Department, which reportedly has a team reviewing the emails for release. The Benghazi emails make up about 900 pages of the 55,000 total.

The department originally proposed releasing all of the emails at once in January 2016, but a federal judge proposed they be released in batches instead.