More Americans Than Ever Are Registered To Vote — Thanks, Social Media 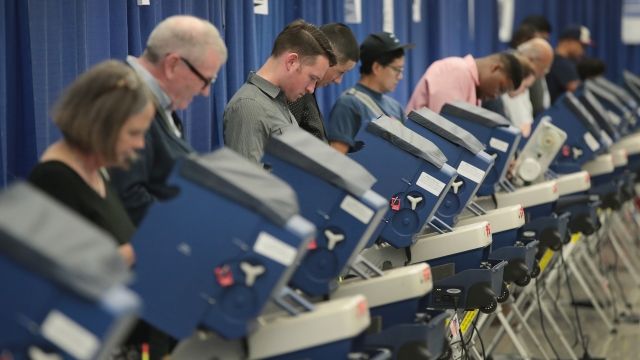 A record number of Americans are registered to vote in 2016, and your favorite social media platform might be why.

There's no national database keeping track of the number of registered voters, but political data company TargetSmart tracks state numbers. According to its data, more than 200 million people were registered to vote as of Oct. 25.

A number of popular startups and social media sites have pushed their users to register and to educate themselves about the issues and candidates on this year's ballot.

Take TheSkimm, for example. It's a startup centered around a daily email newsletter, and it's widely popular with an important demographic — millennial women. Through a partnership with Rock the Vote, the company registered nearly 95,000 women to vote.

Twitter also partnered with Rock the Vote to help get people registered. Users could send a message with their zip code to the company's @Gov account, and in response, they'd get their state's voter registration deadline and a personalized link to register.

YouTube started reminding users about voter registration deadlines in September. The campaign, #voteIRL, reminded people that even though many online are keeping up with the election, voting is something that needs to be done "in real life."

Snapchat partnered with the app TurboVote to encourage users to register. The partnership let people check their eligibility and register within the app.

Social media giant Facebook also encouraged civic engagement throughout the 2016 campaign season. For four days in September, users saw a reminder to register to vote at the top of their Timelines.

Multiple states across the country recorded spikes in voter registration requests during those four days. In California, more than 123,000 people registered to vote or updated their voter information on the first day of Facebook's Timeline reminder.