Starbucks Tries To Up Its Coffee Cred By Serving Flat White 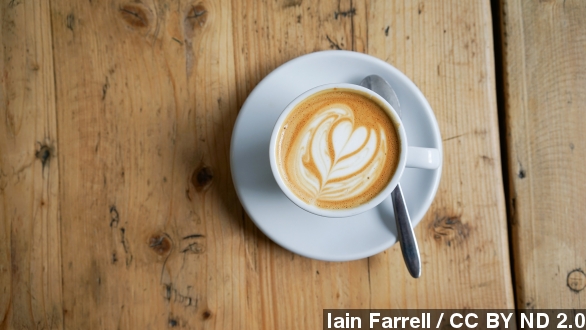 Coffee connoisseurs can celebrate! Coffee giant Starbucks is adding the flat white to its U.S. menu.

The drink, which originated in Australia and New Zealand in the 1980s, is made of espresso and steamed milk. While that might sound a lot like a latte or a cappuccino, here are a few key differences.

First, a flat white is usually smaller than a latte with a higher coffee-to-milk ratio. And unlike a cappuccino, which is topped with dry foam, a flat white has a head of microfoam.

And while there's no precise definition for the drink — different cafes make it in different sizes and proportions — it's that velvety microfoam that seems to be the core characteristic.

This is the latest move in Starbucks' plan to get itself more coffee cred.

Late last year, it opened a Reserve Roastery and Tasting Room in Seattle — an upscale outlet where customers can choose between six different brewing methods. It has plans to open 100 more this year.

Flat whites aren't completely new to Starbucks, though. The drink is already served up at its outlets in the U.K., Australia and New Zealand.

It is somewhat ironic that Starbucks is using an Aussie drink to class up its act, considering the country has largely rejected its advances.

The Seattle-based company opened its first store Down Under in 2000 and had 84 at its peak. But just eight years later it had racked up $143 million in losses. It was forced to close 60 stores and sold off the rest.

According to Vice, Australia already had a very strong coffee culture. "While Starbucks introduced Americans to a European Lite version of coffee shop culture, in Australia it was a latecomer to a party no one invited it to."

The flat white will not be a limited-edition offering like the famous Pumpkin Spice Latte. It becomes part of Starbucks' core menu and will be served year-round. It is available starting Jan. 6.