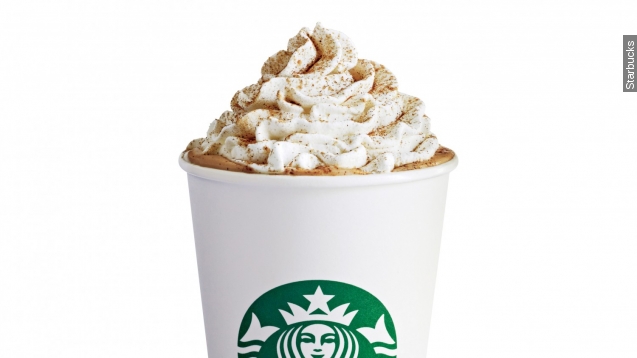 OK everyone, take a deep breath in, smell that spice, and let it out. Starbucks' Pumpkin Spice Latte now actually contains real pumpkin.

"Put a little cinnamon in there. Put a little nutmeg in too. It's a pumpkiny swirl onto a beautiful, beautiful beverage. ... We said, 'Hey pumpkin, meet spice, you two are gonna be best friends.'" (Video via Starbucks)

While many of us may have thought we were drinking some pumpkin before, there actually has never been any of the squash in the company's Pumpkin Spice Latte since it became a seasonal menu staple in 2003.

To get that pumpkin flavor and color, Starbucks used a caramel coloring and spices typically associated with pumpkin pie.

And only at Starbucks could you get a cool title like this: The company's director of espresso, Peter Dukes, wrote in a blog post that this fall the drink "will be made with real pumpkin and without caramel coloring." In the new ingredient list, you can clearly see "pumpkin puree" is listed.

Although, we should point out that Dukes never revealed exactly how much pumpkin is going to be in every drink.

Still, it's a pretty big deal since this is the first time Starbucks has changed the recipe since the drink's conception.

And while Starbucks doesn't come out and say it, the recipe change might be due to a blogger who calls herself the Food Babe. Last year she revealed in a blog post that the Pumpkin Spice Latte contained no pumpkin, and her post went viral.

She's still not super happy with the change, though, writing, "I still see that they're using natural flavors (which are proprietary chemicals that make processed food taste better than it should)."

But the recipe change should thrill the average American.

After all, we reportedly eat about five pounds of pumpkin each year. That is a whole lot of pumpkin. (Video via YouTube / Jamie Oliver)

Starbucks would probably just like you to eat a little less pumpkin pie and drink a lot more of its Pumpkin Spice Lattes. Or both. I'm gonna go with both.