Starbucks Is Late To The Party With Kale Smoothies 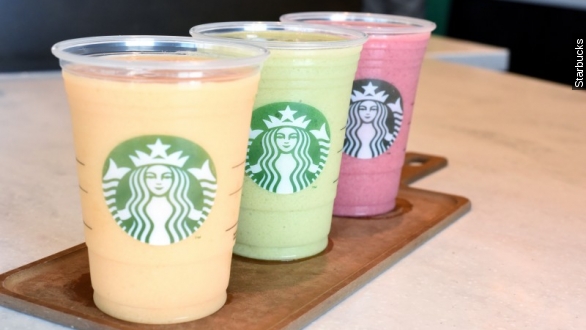 The king of super foods has finally been added to Starbucks' menu.

The coffee giant announced Tuesday it's adding three Evolution Fresh smoothies to its menu and will give customers the option of adding fresh kale to the drinks.

The three flavors of smoothies include Sweet Greens, which is full of green vegetables, Strawberry and Mango Carrot. Each drink will include around 20 percent of a person's daily recommended amount of fruit and vegetable servings.

Unfortunately, when it comes to kale Starbucks is a little late to the party. (Video via Cooking Channel)

Back in March, rumors erupted that McDonalds would be adding the leafy green plant to its menu through salads and smoothies.  (Video via McDonald's)

That was after McDonald's debuted this ad back in January for its Big Mac.

"This is not Greek yogurt. Nor will that ever be kale."

Jamba Juice actually added a kale smoothie to its list of items in 2014. But unlike Starbucks' smoothie, this one already has the kale added in.

In fact, many fast food places are trying to lure in more customers with healthier menu items.

Wendy's chief marketing officer recently told CNBC the fast food chain tested a spinach salad with chicken and quinoa a few months ago. No word on how it went over with customers. (Video via Wendy's)

Starbucks also announced this week the additional of two new wraps and yogurt to its menu in a move that's bringing the company best known for coffee well beyond that.

Noting how Starbucks dropped "coffee" from its official name in 2011, Refinery29 writes "This rollout shows that Starbucks continues to be serious about expanding its offerings well beyond coffee ... We foresee the chain evolving into a one-stop shop where you can always find something suitable to eat or drink at any time of day."

As for Starbucks, at the moment you'll only be able to order a smoothie topped with kale if you live in California, Alaska, Oregon, Washington or Idaho. No word yet on when more states will be added to that list.

This video contains images from Starbucks.