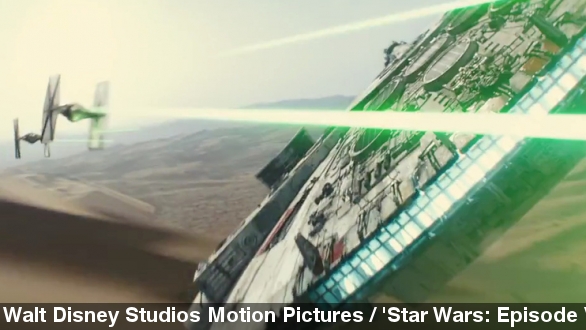 SMS
'Star Wars' Teaser Trailer Finally Awakens
By Evan Thomas
By Evan Thomas
November 28, 2014
We finally have the real teaser for 2015’s 'Star Wars: The Force Awakens,' after fakes made the rounds ahead of time.
SHOW TRANSCRIPT

We could make a Star Wars reference, but now we don’t have to.

Disney released the much-hyped 88-second teaser for its next installment of Star Wars Friday, in a selection of theaters around the U.S. and in a stream from Apple’s trailers website. (Video via Star Wars)

The hype was so strong with the trailer, in fact, that fakes made the rounds.

Some outlets had to do some debunking.

And the Star Wars team even had to respond to complaints that the fake version looked bad because it was, well, fake.

As a teaser, it did its job very well. There aren’t many spoilers to be gleaned from scene-by-scene dissections of the official thing.

Stormtroopers are wearing newly stylized armor, pilots are still flying TIE fighters and X-Wings, and a ship that looks a lot like the Millennium Falcon made an appearance — though we can’t be 100 percent sure. If that’s her, she’s had some work done on the sensor dish. The trailer also featured a lightsaber with a cross guard.

It was a feature that’s generating its own little whirlwind of… strong reactions on Twitter.

And not one single frame of Jar Jar Binks, which ought to make a lot of people happy.

The Force Awakens is set thirty years after return of the Jedi. Mark Hamill, Carrie Fisher and Harrison Ford are confirmed to be reprising their roles as Luke Skywalker, Leia Organa and Han Solo, respectively. But at this point, not much else is known. (Video via 20th Century Fox)

One of Disney’s first moves was to wipe out the novels and stories of the Expanded Universe, so for better or for worse The Force Awakens will be an original story. (Video via 20th Century Fox)

Release is set for December 18.