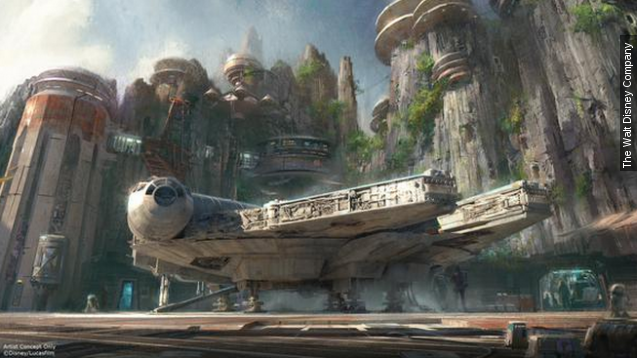 By Eugene Daniels
August 15, 2015
"Star Wars" is headed to both Disney theme parks and it's all part of the studio bringing the series to an entirely new generation.
SHOW TRANSCRIPT

"Star Wars" fans rejoice! You'll soon be able to take your very own ride on the Millennium Falcon. (Video via Walt Disney Studios)

Saturday, Disney announced two huge "Star Wars" expansions at both of its parks — Disneyland and The Walt Disney Resort.

It's reportedly the largest expansion ever, with both clocking in at 14 acres each.

The new parks are part of Disney's attempt to bring "Star Wars" to a new generation, or just extend their world domination. (Video via Walt Disney Studios)

Disney has announced four new "Star Wars" flicks this year, including the first of the new trilogy, "The Force Awakens," that hits theaters this Christmas. (Video via Walt Disney Studios)

If you ask me, the park expansions and movie announcements almost make up for the hot-mess that was Jar-Jar Binks. Almost. (Video via Walt Disney Studios, 20th Century Fox)