'Star Wars Day': May The Fourth Continue Our Obsession 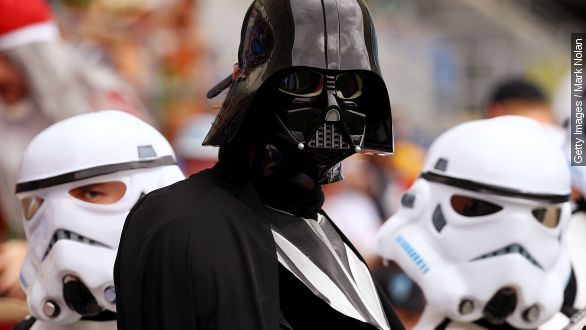 SMS
'Star Wars Day': May The Fourth Continue Our Obsession
By Jay Strubberg
By Jay Strubberg
May 3, 2015
We've been inundated with Star Wars news lately, but with the first new film due out in December, "too much Star Wars" just isn't possible.
SHOW TRANSCRIPT

It's time to celebrate all things "Star Wars" ... um, again.

May 4 is "Star Wars Day," an unofficial holiday where devoted fans get decked out as Jedi, Stormtroopers, Wookiees and other characters, greeting each other with, "May the fourth be with you." We're guessing, by now, you understand the play on words there.

The phrase and holiday didn't break out of dedicated Star Wars circles until around 2011, but has taken off with the help of the online community. (Video via Lucasfilm Ltd.)

One day ahead of "Star Wars Day," Disney also announced a new line of "Star Wars: Episode VII"-themed action figures and other merchandise that is scheduled to hit stores September 4, 2015.

This all comes just weeks after the big Star Wars Celebration in Anaheim, California. Die-hard fans were treated to cast appearances, panel discussions, theatrical displays and just about as much of the galaxy far, far away you could fit into a four-day event. (Video via Attractions Magazine)

That's "Star Wars Day," the "Star Wars Celebration," more toys and the release of the second trailer for the upcoming film all within the span of a month.

So, is it possible fans will ever get burned out? Probably not, because they're clearly starving for the next film. (Video via 20th Century Fox / "Star Wars: Episode V - The Empire Strikes Back")

"Star Wars: Episode VII - The Force Awakens" is slated to be the beginning of a third trilogy for the iconic franchise, and with J.J. Abrams at the helm along with the return of classic characters, every sneak peek at the film has captivated fans like a Jedi mind trick.

It's also been 10 years since we've seen lightsaber duels hit the big screen. And even then, we had to endure Hayden Christensen attempting to pull off young Anakin Skywalker's conversion to the dark side.

So there probably isn't such a thing as "too much Star Wars news" right now, meaning Disney can expect more gains from the impressive financial empire the studio bought in 2012.

According to Statistic Brain, if you ball up box office revenue with sales from DVDs, toys, video games and other products, the total Star Wars franchise revenue is around $27 billion dollars.