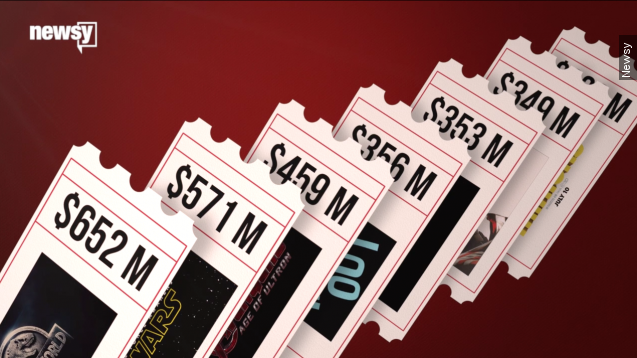 SMS
'Star Wars' And Universal Pictures Push Box Office To Record $11B Year
By Jamal Andress
By Jamal Andress
December 30, 2015
Each of the top seven movies in 2015 brought in more money than the No. 1-grossing movie in 2014.
SHOW TRANSCRIPT

2015 was a great year for the movie business.

And 2015 had the second most profitable summer in box office history thanks to movies like "Jurassic World," "Inside Out" and "Avengers: Age of Ultron."

Combine that with an above-average $353 million showing from "Furious 7" during the spring, and of course that one space movie.

The shining star of this huge year at the box office is undoubtedly Universal Pictures, which managed to increase its summer ticket sales by 259 percent compared to last year. The studio is also responsible for "Jurassic World," "Furious 7" and "Minions" — three of the top seven highest-grossing films this year.

And while this is undoubtedly a huge year at the box office, next year looks pretty packed, too.