Staples And Office Depot: Second Try In A Different Climate 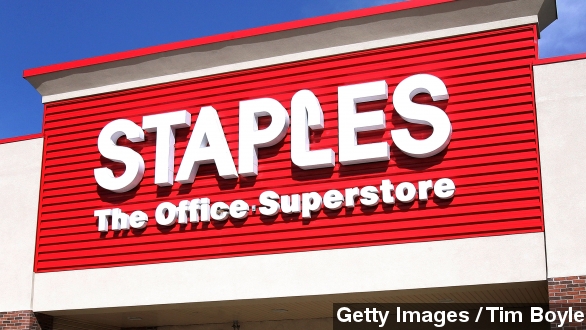 News of the advanced talks first broke late Monday night into early Tuesday morning with The Wall Street Journal's sources cautioning, at the time, that a deal between the two office-supply giants was not a guarantee.

"Staples, that was easy," according to Staples' old commercials.

Far from it, actually. The two might still have to trend toward Staples' newer "Make More Happen" slogan to get a deal past regulators.

The Federal Trade Commission sued to prevent a Staples-Office Depot merger in 1997 with a senior official saying the two companies were trying to eliminate competition and eventually drive up prices for consumers.

But those were the days before Amazon and other e-commerce retailers began putting brick-and-mortar retailers on edge, offering — especially in Amazon's case — cheaper prices and home delivery of virtually anything you could want.

"It's very hard to be a brick-and-mortar retailer these days," The Wall Street Journal's Liz Hoffman said. "You've seen it in other corners of the world — Circuit City or Linens 'n Things, they don't exist anymore. ... They haven't said anything publicly yet, but what they're likely to argue is that we need this merger to compete."

Office Depot bought out Office Max only two years ago, so this deal would effectively combine what was recently three companies into one.

The press release issued by both companies said compensation for Office Depot shareholders will include $7.25 a share along with about a fifth of a share of Staples stock.

Several major stock or purchase moves in the corporate world in recent years have been driven by activist investors, and The Wall Street Journal says this is no different.

Starboard Value, a driving force behind Yahoo's decision last month to spin off its Alibaba shares, owns 6 percent of Staples and 10 percent of Office Depot.