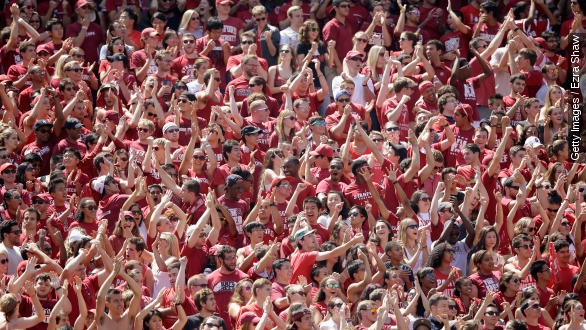 Stanford University just made it a whole lot easier for some students to attend college.

As part of an expansion to its financial aid package, starting next school year, students whose families have a total annual income and typical assets less than $125,000 will not be expected to contribute to tuition. Instead, it'll be covered by federal and state grants and scholarships. (Video via Stanford Financial Aid)

The university's monetary threshold for free tuition used to be $100,000.

Another new perk: Students whose families make less than $65,000 a year, won't have to pay costs for room and board.

Students who receive free tuition are expected to pay Stanford back with $5,000 earned through summer employment or work during the school year.

This is pretty generous, especially since Stanford just increased its tuition prices for the 2015-16 school year.

According to Palo Alto Online, the board of trustees approved a 3.5 percent tuition increase back in February. Undergraduate students will now have to pay $60,427 a year. That breaks down to almost $46,000 in tuition and just over $14,000 in room and board. (Video via Stanford)

A look at CollegeData shows around 98 percent of freshman who apply for financial aid and are found to truly need it are awarded some aid by Stanford.

And in a press release, Stanford said about 77 percent of its graduates leave college with no debt after graduation.

A writer for Vox reports Stanford is able to be so generous with its financial aid because it has an endowment of $21 billion, making it one of the richest universities. It also accepts a large portion of students who come from higher-income families, who help subsidize those from lower-income families.

Stanford is just one of many schools offering free tuition to certain students.

CNN reports Ivy League schools Yale and Harvard both offer free tuition to students whose families make less than $65,000. Princeton awards the same thing for those making less than $120,000.

This video contains images from Getty Images and music from Kevin MacLeod / CC BY 3.0.