Standoff At Oregon Wildlife Refuge May Be Coming To An End 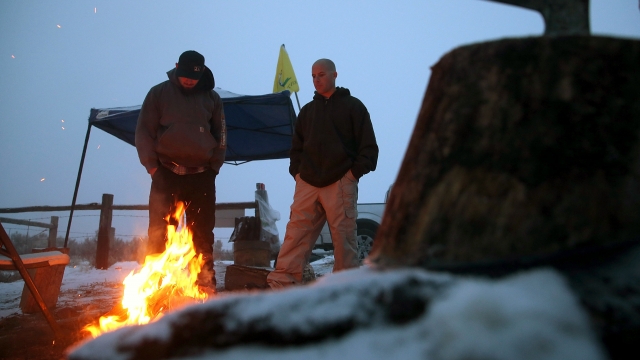 SMS
Standoff At Oregon Wildlife Refuge May Be Coming To An End
By Melissa Prax
By Melissa Prax
February 11, 2016
The last four occupiers of the Oregon wildlife refuge are expected to end their protest Thursday after Cliven Bundy was arrested by the FBI.
SHOW TRANSCRIPT

Only four occupiers remain at Oregon's Malheur National Wildlife Refuge, and they are expected to abandon their post Thursday.

This is after Cliven Bundy, the father of initial protest leader Ammon Bundy, was arrested by the FBI in Portland.

Ammon Bundy was arrested late last month after being pulled over on his way to a community meeting. He's since asked the remaining protesters to leave the refuge.

The occupation has continued for over 40 days as militia members protest ranchers' rights and the imprisonment of local ranchers. One of the protesters was killed in a shootout with authorities.

The FBI surrounded the refuge Wednesday after one of the protesters rode an ATV outside the militia's perimeter, prompting local FBI to contain the area.

A local FBI agent said in a statement, "We reached a point where it became necessary to take action in a way that best ensured the safety" of protesters, police and residents.

This video includes clips from The Salt Lake Tribune, Fox News and KOIN and images from Getty Images.