Stamp Prices Are Falling By 2 Cents, And That's Bad News For The USPS 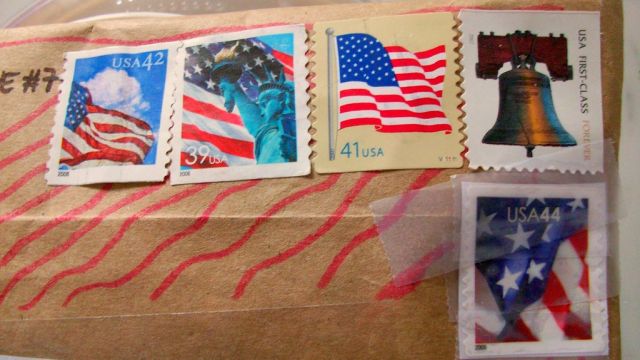 SMS
Stamp Prices Are Falling By 2 Cents, And That's Bad News For The USPS
By Matt Moreno
By Matt Moreno
February 29, 2016
The U.S. Postal Service says it will lose $2 billion a year with the price change.
SHOW TRANSCRIPT

By dropping the price of stamps by 2 cents, the U.S. Postal Service says it will lose some $2 billion a year.

Starting April 10, stamps for 1-ounce letters will drop in price from 49 cents to 47 cents. This will come after the expiration of a 2-year agreement between Congress and the U.S. Postal Service to raise the price of stamps by 3 cents.

The price hike reportedly helped the sputtering post office raise some $4.6 billion, but knocking the price back down will reportedly cost it $2 billion a year.

Postmaster General Megan J. Brennan says the service is suffering from "extreme multiyear revenue declines" because of the Great Recession.

Brennan said in a statement: "Removing the surcharge and reducing our prices is an irrational outcome considering the Postal Service’s precarious financial condition."

The Great Recession and increased online communication has taken a toll on the USPS, which has tried to get creative with how to save and earn money, including a bid to stop Saturday deliveries as well as to start alcohol deliveries.

The Postal Service's move to end Saturday delivery was halted in Congress. The Improving Postal Operations, Service and Transparency Act, which would allow for alcohol deliveries, is currently in review.

This video includes clips from WXYZ, the U.S. Postal Service and images from Indie Bands With a Mission / CC BY 2.0 and Getty Images.