Refugee Supporters Are Marching To Say Syrians Are Humans, Too 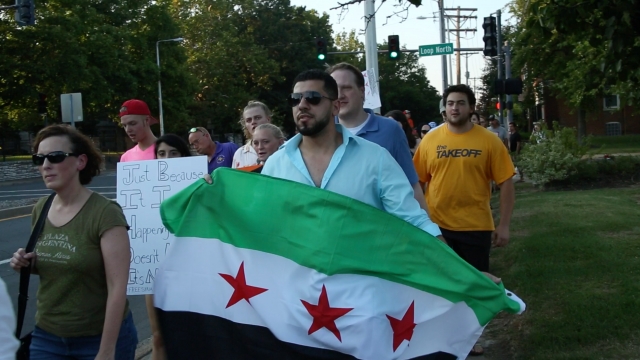 SMS
Refugee Supporters Are Marching To Say Syrians Are Humans, Too
By Melissa Prax
By Melissa Prax
August 29, 2016
St. Louis takes in about 650 refugees a year, but that number is expected to rise. Marches like this are part of encouraging that.
SHOW TRANSCRIPT

"The love for another human being is not a religious issue. It's not a race issue, it's not a nationality issue — it's a human reality," Faizan Syed, the executive director of the Council on American–Islamic Relations St. Louis, said at a rally on Sunday.

These rally-goers want to welcome more Syrian refugees to St. Louis. Marches like this are happening around the country and worldwide.

"Nationally, this is more of an issue now, and with that comes a lot of racist rhetoric, but that also means people are coming now and more people at least paying attention," rally-goer Raquel Dominguez said.

St. Louis' resettlement office sponsors about 650 refugees every year. But that number is expected to rise.

About 4.8 million Syrians have left the country due to violence. The U.S. has taken in about 10,000 so far.

That's not nearly as many as Canada and several other Western nations.