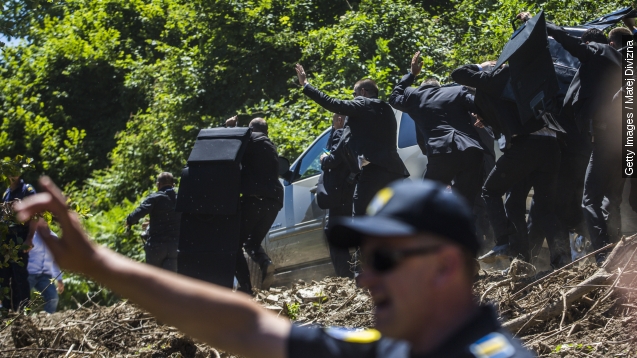 This isn't the scene you would expect at an event commemorating the dead.

A crowd of Bosnian Muslims, known as Bosniaks, attending the 20th anniversary of the massacre in Srebrenica threw rocks and water bottles at Serbian Prime Minister Aleksander Vucic. His aides quickly whisked him away and the Serbian government called the attack an assassination attempt.

But it's what they're not calling the Srebrenica massacre that could've led to that scene at the memorial Saturday.

Srebrenica was the site where, in 1995, Bosnian Serb troops slaughtered as many as 8,000 Muslim men and boys during the Bosnian War. According to the United Nations definition, that is a genocide and the International Criminal Tribunal for the former Yugoslavia and International Court of Justice have both labeled it as such. (Video via United Nations)

But earlier in the week, Russia — with support from Serbia — blocked a United Nations resolution that would've labeled the Srebrenica massacre a genocide. Combine that with previous statements from Serbia's Prime Minister, and things were bound to get out of hand.

"This sign is directed toward Serbia's Prime Minister Aleksander Vucic, reminding him of what he said in the Milošević government in the 1990s: 'For the life of one Serb, we take 100 Muslims,'" BBC reported.

Vucic, who was a part of the Serbian Radical Party (SRS), made that statement one week after the massacre in Srebrenica. He has since re-branded himself as a pro-Western government leader and attended the event to pay respect to victims of what he has called a "horrible crime."

Many Bosniaks finally buried their recently recovered loved ones Saturday in fresh graves; many of the 136 bodies were incomplete. But some still believe healing cannot fully take place unless countries recognize the killings for what they were.

"Denying the Srebrenica genocide is a factual misrepresentation and disregards the highest judicial decisions of two international courts. It is an ultimate insult to the victims," ICTY Chief Prosecutor Serge Brammertz said.