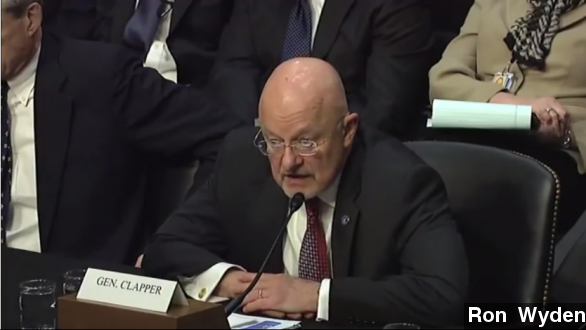 SMS
Spy Chief Says NSA Should've Told Us It Was Tracking Calls
By Adam Falk
By Adam Falk
February 18, 2014
In an interview with The Daily Beast, Director of National Intelligence James Clapper said the NSA should've been transparent from the beginning.
SHOW TRANSCRIPT

Director of National Intelligence James Clapper said something he "probably shouldn't" have Monday. But maybe he just doesn't want to make the same mistake twice.

In an interview with The Daily Beast, Clapper said the American people should've been told about the collection of phone records from the beginning. He starts: "Had we been transparent about this from the outset right after 9/11 … We wouldn't have had the problem we had."

He argues if Americans knew why the part of the Patriot Act that's allowed for mass surveillance was set up, how it was going to work and why it was necessary, it would have been OK. (Via C-SPAN)

"Clapper is right — if the government had been open with the American electorate about surveillance of phone records in the wake of 9/11 majorities may well have been in favor of the 215 program. It could've been just another element of the government's anti-terror program."

In his interview, Clapper compares it to taking off your shoes at the airport — something we just do for safety.

A writer for The Verge mostly agrees, saying, "The sentiment makes some sense, though it should be noted that the mobile telephony landscape has changed considerably in the last decade."

An editor at Salon writes Clapper's suggestion is "troubling," adding, "Clapper's assumption that bulk phone data collection would have been readily accepted as a fact of life in the contemporary U.S., like fingerprints, is unfounded."

Either way, Clapper's comments are definitely an about-face from comments he made during a Senate Select Committee on Intelligence last month.

"Terrorists and other adversaries of this country are going to school on U.S. intelligence sources, methods and trade craft and the insights that they are gaining are making our job much, much harder."

The Daily Beast also spoke with Clapper about an appearance before Congress last March, when he said, "No sir," to a direct question about whether the NSA collects phone data. He said in the interview, "I was not even thinking of what he was asking about." Rather, he misunderstood the question. ​​

Journalists and lawmakers both have called for Clapper's firing over that incident. He was, after all, under oath and answered untruthfully, whether he understood the question or not. (Via Slate)