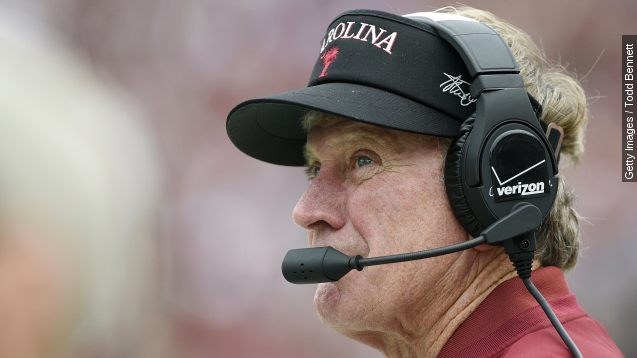 It's no secret the South Carolina Gamecocks are having an off year, starting the season 2-4.

And it looks like head coach Steve Spurrier is exiting early. The South Carolina head coach is retiring, effective immediately. (Video via WPDE)

But for a man who's been coaching college football since the '70s, Spurrier's not-so-good season won't have much of an impact on his legacy.

Instead, Spurrier will be known as the head coach who made the University of Florida a program to be reckoned with in the '90s.

The Heisman trophy-winning quarterback-turned-head coach probably won't be remembered for the Gamecocks' recent struggles on defense.

When people think about his time in Columbia, they'll think about how he was the only coach to lead the team to an 11-win season, and he did it three times.

"To the Carolina fans, I feel fortunate. I'm thankful to be the coach here. And I pledge to you: You're going to get my best shot," Spurrier said as he was introduced as South Carolina's head coach in 2004.

But perhaps most important? People will remember Spurrier for his quick wit and always saying what was on his mind.

Spurrier has always had a way with words, whether it was taking jabs at Florida State or Tennessee, nothing was off limits for him, especially what he liked to refer to as "talkin' season."

"Our kickers? Gee. It's like the Army — left, right, left, right. They're kicking it all over the place. I don't know if we can beat anybody this year," Spurrier said jokingly to reporters.

Who knows what's next for the wise-cracking Spurrier. Arby's spokesman?