Spread The Love, Tons Of Bacteria With A 10-Second Kiss 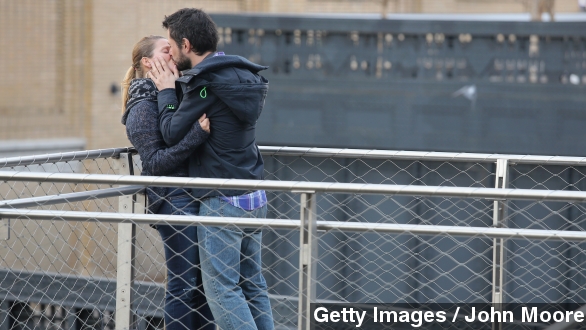 SMS
Spread The Love, Tons Of Bacteria With A 10-Second Kiss
By Mikah Sargent
By Mikah Sargent
November 17, 2014
A 10-second intimate kiss transfers a whopping 80 million bacteria. But the transfer isn't as bad as it sounds, and might even be healthy.
SHOW TRANSCRIPT

Here's something you'll never be able to forget: next time you lean in for a kiss, keep in mind you're transferring and receiving millions of bacteria. How romantic!

A group of scientists from the Netherlands asked 21 couples at an Amsterdam zoo to participate in the study. The couples had their mouths swabbed before and after sharing a kiss, and researchers examined the swabs for bacteria. (Video via YouTube / Bart Weber)

According to the study, published in the journal Microbiome, an "intimate kiss" lasting 10 seconds transfers an average of about 80 million bacteria. The researchers had one member of the couple consume a probiotic yogurt drink to measure the transfer, so they could identify the specific bacteria found in the yogurt. (Video via YouTube / Tatia Pllieva)

And other than that stomach-turning statistic, the researchers also discovered the couples shared similar bacterial colonies.

In other words, two individuals in a couple have more similar bacteria than two strangers. Which makes sense, given they're swapping 80 million bacteria on the regular.

Now, before you go making your significant other swig a capful of mouthwash before every kiss, it's important you consider the benefits of all that bacteria.

Time quotes one of the scientists in the investigation who says, "There are a number of studies that show if the diversity in bacteria increases—more different types of species—this is a good thing," because it helps build up your immune system response.

And in the grand scheme of things, 80 million bacteria really isn't all that much. According to the National Institutes of Health, microorganisms outnumber human cells by 10 to 1 — that puts the numbers in the trillions, folks. (Video via YouTube / TinyScience)

And so we implore you, go forth and do your part to add to those trillions.