'Spotlight' Is Winning Big At Award Shows, But Can It Win An Oscar? 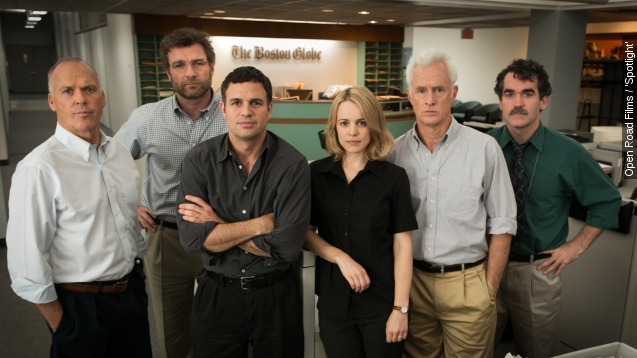 SMS
'Spotlight' Is Winning Big At Award Shows, But Can It Win An Oscar?
By Lexie Hammesfahr
By Lexie Hammesfahr
December 1, 2015
"Spotlight" has already snagged some awards this season, but that doesn't mean it will win the Oscar for Best Picture.
SHOW TRANSCRIPT

The current Oscar front-runner, "Spotlight," is already racking up some major awards, and we're not even into the heat of awards season.

The film, which is based on the Boston Globe's uncovering of the Catholic priest sexual abuse scandal, was named Best Feature on Monday night at the 25th Gotham Independent Film Awards.

Aside from the Gothams, "Spotlight" has won a few other notable awards.

On top of that win, "Spotlight" is nominated for Best Editing, Best Director and Best Screenplay.

Earlier this year, Tom McCarthy and Josh Singer won Screenwriter of the Year at the Hollywood Film Awards.

Despite all these accolades, the Oscar race is still wide open. We might get some insight on how the Oscars might play out when the Golden Globes nominations are announced Dec. 10.

But even then, Gold Derby experts are giving the upper hand to "Spotlight" over "The Revenant" for Best Film.

It would be equally hard and unfair to place all our eggs in one basket this early in the awards season. But if the Oscars were held tomorrow, "Spotlight" shines as the lead contender for Best Picture.