Spotify Teams Up With The Service Formerly Known As Rap Genius 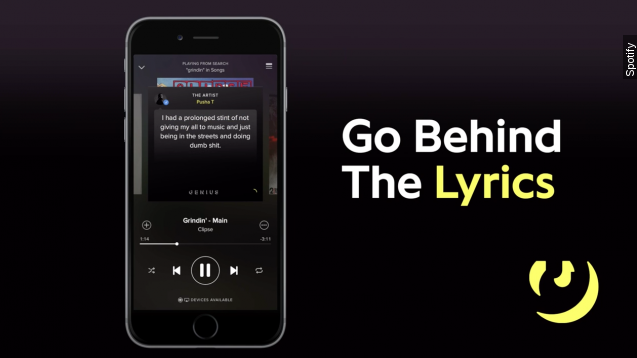 SMS
Spotify Teams Up With The Service Formerly Known As Rap Genius
By Jamal Andress
By Jamal Andress
January 12, 2016
Spotify is rolling out a new feature that shows lyrics and other information on the screen as a song plays.
SHOW TRANSCRIPT

As the Apple Music vs. Spotify streaming battle continues, Spotify has recruited another popular service to help beef up its sales pitch to the public.

You can listen to Yo Gotti, Chance the Rapper, Pusha T and more, and Genius will explain to you exactly what "Down in the DMs" means or how to Milly Rock properly.

While the song plays, the lyrics will pop up onscreen, as will commentary from the artist. You'll also have access to background information on the song, from the producer behind the beat to the inspiration for the lyrics.

Essentially, all the things you would expect to see while on Genius.com. One catch, though: The feature is only available on iPhones for the time being.

The first playlist Spotify and Genius teamed up to annotate is "Behind the Lyrics: Hip Hop," but according to Genius, there will be a pop playlist "premiering VERY soon."

Oddly enough, this is Spotify's second lyrics-focused feature. Spotify partnered with Musixmatch nearly a year ago to put lyrics on your desktop computer.

This Genius feature comes after Spotify premiered its "Discover Weekly" feature, which creates a new playlist every week based on what users listen to.

And, unlike most services that suggest songs for users, it seems people really like the suggestions Spotify comes up with.

All of this innovation couldn't come at a better time for Spotify, which is trying to hold off a growing Apple Music subscriber base. Apple's streaming music service hit 10 million subscribers this month.