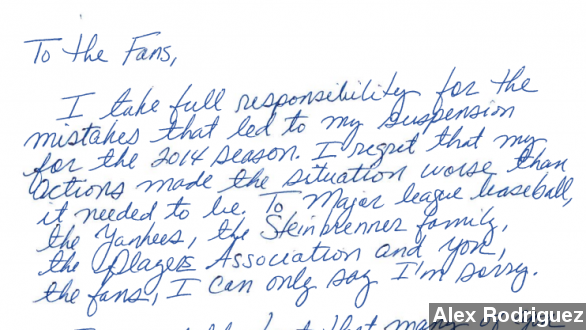 SMS
Sports Writers Rip On A-Rod's Apology Letter
By Christian Bryant
By Christian Bryant
February 17, 2015
Critics panned Alex Rodriguez's handwritten letter to fans, in which he apologizes for "mistakes" that kept him benched for the 2014 season.
SHOW TRANSCRIPT

Yankees third baseman Alex Rodriguez hasn't batted in a regulation game since the 2013 season, but some writers took more than a few swings at A-Rod Tuesday following the release of his handwritten apology.

"I regret that my actions made it worse than the situation needed to be."

That's a dramatic reading of A-Rod's mea culpa to fans by SB Nation and also a representation of how the sports media views his letter: it's basically a farce.

The letter, which was written in cursive, reads in part, "I accept the fact that many of you will not believe my apology or anything that I say at this point."

We'll stop there, because that's where it seems critics are hung up. Rodriguez was suspended for the entire 2014 season for using performance enhancing drugs or PEDs.

For that reason, some writers are calling the letter "empty" and even "unnecessary."

So, what will A-Rod's letter change? According to some, absolutely nothing.

"No matter what happens with the statement, and the press conference, and whether cameras are around, they're going to give him a free and clear shot to show what he can do in spring training because they owe him so much money," ESPN's Buster Olney said.

Whatever the sentiment surrounding A-Rod, he's still contracted with the Yankees for three more seasons and $61 million. And based on his 2013 performance — where his on-base plus slugging percentage was .771 over 44 games — a New York Times writer says, "the Yankees might really need Rodriguez to help their sickly offense."

A-Rod is expected to compete with current third baseman Chase Headley when spring training for the 2015 season begins next week.