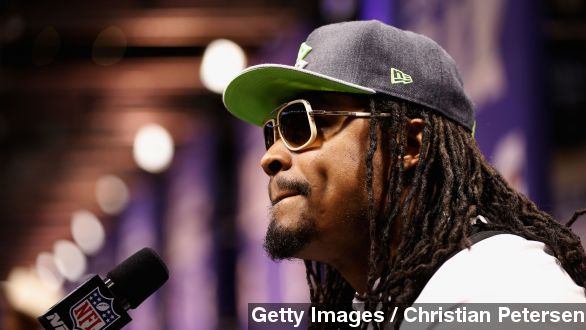 It must be frustrating for Marshawn Lynch. While trying to avoid the media and its questions, over, and over and over again, he's managed to become one of the the media machine's favorite subjects.

Marshawn Lynch was trending Tuesday afternoon after he went to the podium and pulled a Marshawn Lynch, answering every single Super Bowl Media Day question with: "I'm just here so I won't get fined." (Video via WNBC)

Yeah, he's definitely had enough of that. Lynch has been fined more than $100,000 for not making himself available to the media during the 2014 season.

Lynch and his antics couldn't be more polarizing, leaving fans, sports analysts and journalists split on what to make of the superstar and potential back-to-back Super Bowl champion.

Stephen A Smith said, "If I was the NFL I'd have a fine waiting for him every single week."

Dan Patrick said: "It seems he's truly uncomfortable talking to the media. Should we force him?"

"My point is it shouldn't be a professional obligation!"

The confusion about Lynch and his constant reluctance to talk to the media continues online with sports writers levying their opinions on the controversial superstar.

"People that switch to Progressive save a lot of money, man," Lynch said in the commercial.

And despite the moral battle taking place in the sports world, Marshawn Lynch is having no problem pulling in endorsements. Lynch is featured in a Progressive insurance commercial that just hit the internet Tuesday, and some think he'll be featured in a Skittles Super Bowl ad.

"I wanna thank Skittles for asking me questions and for making the game more awesomer," Lynch said.