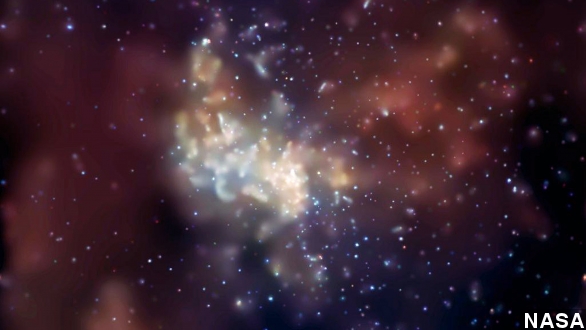 Determining the age of stars — the kind in the sky, although also sometimes the kind on the big screen — has been a tall order. It's a puzzle scientists have been trying to solve for decades, and now they seem to have made a breakthrough. (Video via NASA)

Really quick though — being able to tell how old a star is can be crucial in better understanding concepts from how the universe developed to finding earth-like planets out there in the near-limitless expanse of space. So, if you care about any of that stuff, it's pretty important.

Anyway, so-called 'cool stars,' — stars about the size of our sun — basically look the same, externally, from shortly after they're born, until right when they're about to die, which is why it has been so hard for astronomers to find their age. (Video via NASA)

The new breakthrough comes down to spinning, and a little NASA project known as the Kepler Mission.

All cool stars spin, and all at different rates. The rate at which they spin can be tied to their age — a concept called gyrochronology. (Video via NASA)

The clock that scientists had come up with had a big gap in it between very young stars — which have more sunspots, making it easier for scientists to determine how fast they're spinning — and our own star, the sun: which scientists have been able to date using space debris, created at the same time as the sun. (Video via Harvard-Smithsonian Center for Astrophysics)

And that's where Kepler comes in. Kepler is a powerful little orbital observatory that Earth has been dragging around since 2009, and NASA has been using it to look for planets that could potentially support life. (Video via NASA)

But, crucial for this discovery, Kepler has also been scoping out tons of star clusters — which is important because star clusters are comparatively easy to date, based on their color and brightness. (Video via NASA)

Now, when scientists find an earth-sized planet orbiting a sun-sized star at about the same distance, they can also tell how old the star is, and with that figure out how long the planet's been there, which helps a lot when you're searching through the 300 billion stars in the Milky Way, or the 100 billion galaxies like it.