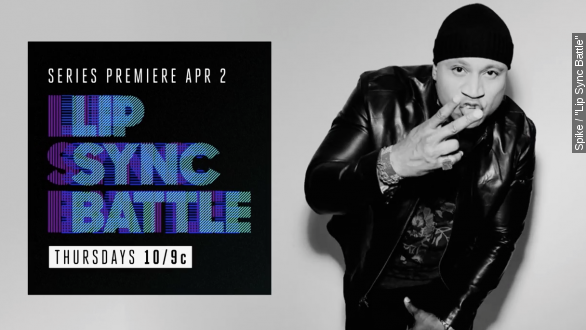 If you landed on Spike when you were flipping through the channels Thursday night, you probably got something a bit different than what you were expecting.

The network premiered its new show, "Lip Sync Battle," hosted by LL Cool J. It is pretty much just an extension of Jimmy Fallon's bit from "The Tonight Show" pitting celebrities against each other in some pretty hilarious lip sync duels.

"My second and final song is 'All I Do Is Win' by DJ Khaled," said Emma Stone on The Tonight Show.

The lip sync bit on "The Tonight Show" proved hugely popular with some of the videos getting more than 40 million hits on YouTube.

The first episode of Spike's show saw The Rock perform Taylor Swift against Fallon's rendition of "Like a Prayer" from Madonna. Anna Kendrick and John Krasinski both stopped by for a battle as well.

The new show is a bit of a departure from the testosterone-fueled programming the network is known for.

"In order to kill a zombie we know you have got to go for its brain," said a host from Spike's "Deadliest Warrior."

It has seen success in the past with shows like "Deadliest Warrior" and mixed martial arts fights, geared towards a younger, mostly male audience. That is a heavily coveted demographic and advertisers were once willing to pay a premium to reach that audience.

So "Lip Sync Battle" is meant to broaden Spike's viewership and provide some content everyone can enjoy.

Fallon and comedian Stephen Merchant pitched the show to Spike a year ago and the network bought it on the spot.

An exec for Spike's parent company, Viacom, told The New York Times, "What could be better as the network is turning the corner to be a broad general entertainment network than a big, broad modern viral variety show?"

However, it might be quite a challenge to keep it feeling fresh after a few episodes. After all, there is a big difference between creating a viral sensation and a lasting television show.