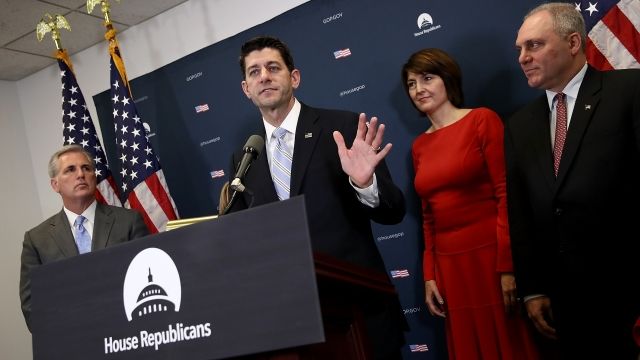 On Tuesday, Ryan and GOP House leadership held their first press conference since President-elect Donald Trump's victory. And given his somewhat distant relationship with Trump in the past, Ryan apparently wanted to make sure Americans know the House and President-elect will work together.

"I'm very confident that we're going to have a unified government that works hand in glove with this administration," Ryan said, using the phrase "hand in glove" for the third time in the 11-minute presser.

And the House is apparently unified behind Ryan. It unanimously nominated him to the speaker post after his speech. Just two weeks ago, it looked like his position could be in jeopardy.

Now that Republicans will have control of the House, Senate and White House come January, they said they're ready to get to work.

"Foremost among our priorities will be bringing balance back to our broken tax code by building a simpler, fairer, flatter code," Rep. Kathy Jenkins said.

SEE MORE: Christie's Support Of Trump May Have Been A Long Time In The Making

Rep. Steve Scalise of Louisiana held up a "Make America Great Again" hat. "It's not just a great slogan," he said. "But inside the tag you see 'Made in the USA.' There are going to be a lot more things made in the USA when this new administration comes in."

"We have an exciting agenda. We have a transition team that we're working with, and we're very excited about getting to work for the American people," Ryan said.

Some of Trump's plans, including spending $1 trillion on infrastructure, reportedly haven't sat well with some conservatives. But Ryan said house leadership is "on the same page" as Trump and that they're "going to make sure that this is a very successful administration."