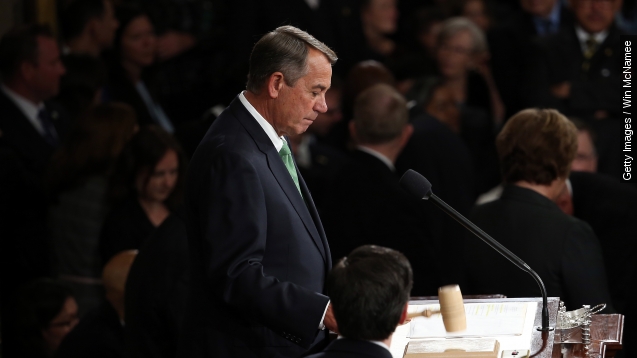 “I do know this, I’m doing this today, for the right reasons, and you know what? The right things will happen as a result," Boehner said during a press conference on Friday.

In a surprise move, House Speaker John Boehner will resign from Congress at the end of October.

“Last night I started thinking about this, and this morning I woke up, and I said my prayers as I always do. And I decided, you know, today’s the day I’m going to do this. As simple as that.”

Boehner’s had a long tenure in Congress, first being elected in 1990 and eventually making his way to speaker in 2011.

Boehner's faced an uphill battle in controlling the GOP in Congress. (Video via Speaker of the House John Boehner)

Time and time again, House Republicans made attempts to oust him.

None of them succeeded, of course, but Boehner’s name was never too far from words like "mutiny" or "revolt" when it came to his own party.

And Boehner wasn’t shy about firing back, though.

"But here’s the attitude. "Ohhhhh, don’t make me do this. Ohhhhhh, this is too hard." You should hear them," Boehner said during a press conference at the Middletown Rotary Club in Ohio in 2014.

But at times it really did feel as if Boehner had lost control of his caucus. (Video via NBC)

"But when you have my job, there's something you have to learn: When I looked up, I saw my colleagues going this way — and you learn that a leader without followers is simply a man taking a walk." Boehner said in an interview with Jay Leno in 2014.

More recently, his inability to stop the Iran deal from going through or to strip Planned Parenthood’s funding created discontent among some of his fellow party members.

"Let me start by saying I’m proud of what we’ve accomplished in Congress so far this year," Boehner said during a press conference in July.

But he did manage to get the pope to come speak at Congress for the first time ever. Which, really, is a pretty big accomplishment.

Boehner endorsed House Majority Leader Kevin McCarthy from California as his replacement during a press conference on Friday.

As for Boehner, well, he says he plans on getting as much as he can done before Oct. 30.  (Video via C-SPAN)