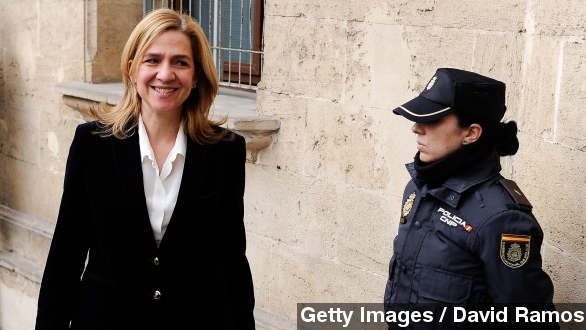 SMS
Spain’s Princess Cristina To Face Unprecedented Fraud Trial
By Cliff Judy
By Cliff Judy
December 22, 2014
The sixth in line for Spain’s throne is accused of embezzling public money in the modern case of a Spanish royal going to trial.
SHOW TRANSCRIPT

A long-running investigation that got a Spanish princess banned from royal events and may have even played a part in her father abdicating the throne will go to trial.

In unprecedented accusations, prosecutors say Princess Cristina helped her husband embezzle millions of dollars from local governments nearly a decade ago. While her attorneys have repeatedly declared her innocence over the years, prosecutors say a company run by Cristina’s husband vastly overcharged to run sporting events and then transferred some of that money to another company owned by the couple. (Video via Sky News & Euronews)

The scandal not only tarnished the princess’ reputation, but that of her father — an impressive feat when you consider how beloved King Juan Carlos was during his four decades on the throne.

Instead of keeping control of Spain as a dictator when he was named king in the mid-70’s, King Juan Carlos led the country’s transition into democracy and free elections.

Still, when the king abdicated the throne in June, his health, a lavish hunting trip during tough economic times and the lingering investigation into his daughter were among the most cited reasons Juan Carlos stepped down. (Video via BBC)

Princess Cristina and her husband are two of more than a dozen defendants who’ll now stand trial in the tax fraud case. She remains sixth in line to the Spanish throne.